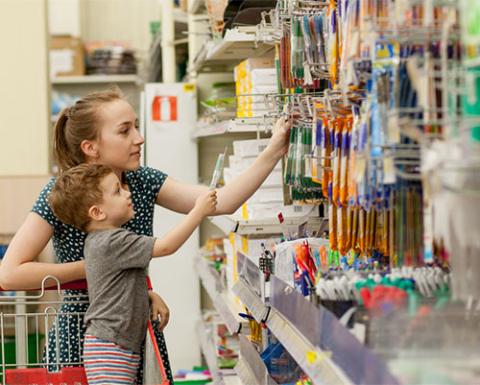 Walmart, Target and Amazon are the top destinations for back-to-school shopping.

Once again, Walmart, Target and Amazon “far outstrip the competition” for back-to-school shopping, according to JLL’s annual Back-to-School Survey.  Asked to name the top three retailers where they plan to shop, almost two-thirds (63.5%) of parents specified Walmart, 53.3% chose Target and 50% chose Amazon.

The other retailers in the top 10 were Old Navy, Staples, Dollar Tree, Macy’s, Kohl’s, Costco and Office Depot. But they lagged far behind the top three, with No. 4, Old Navy, chosen by 7.5% of parents.

The survey found that more than half of back-to-school shoppers will look for sales and coupons; roughly 50% will buy fewer products and only focus on necessities; and one-third will reuse existing products and another 16% will buy used instead of new.  Also, free shipping or delivery will be the most important determinant of where to shop online.

More than half of parents plan to cut back on back-to-budgets this year due to inflation, according to the survey. Nearly 40% (37.9%) plan to spend “somewhat less’ than last year, while 27.2% plan to spend “significantly less.” Nearly 32% (31.8%) said their back-to-school budget will not be affected by inflation.

The survey put the average budget this year for back-to-school shopping at $339 compared to an average of $322 per child last year.  The difference in how consumers respond to inflation helps explain why planned back-to-school spending, on average, is expected to rise 5.4%, JLL stated, noting that those whose budgets are not affected by inflation plan to spend considerably more than in 2021.

“Despite inflation concerns, back-to-school spending might reach a record high this season," said Naveen Jaggi, president of Retail Advisory Services, JLL. "Our survey results show parents are resilient and plan to ensure their child has the proper school supplies and clothes they need for this upcoming school year, but retailers should be prepared for consumers to break brand loyalty, depending on better pricing and inventory options."

• Slightly more than one-quarter (25.6%) of parents started shopping during or before June. Most parents, however, will wait to shop in July and August, which will lift retail sales for categories like apparel and stationery

• Roughly 31.5% of millennials started shopping before July and more than 7% of Gen Zers have already completed shopping.

• Additionally, 34.2% of Gen Xers are more likely than other generations to wait until August to shop. These purchases could be enough to continue to lift retail sales, JLL advised.

• Discount stores were again the most popular store type, with 78.2% of parents planning to shop there for back to school. More than two-thirds of parents (68.6%) plan to visit online stores and marketplaces for their shopping lists, with the percentage rising for higher-income parents. Office supply stores were the third most popular among all parents.

“The rise in prices may be an opportunity for retailers to gain consumer trust and loyalty by offering discounts and free shipping options,” added Jaggi. “The consumers are clearly willing to spend this year, but where they choose to spend will be entirely up to the retailer.”