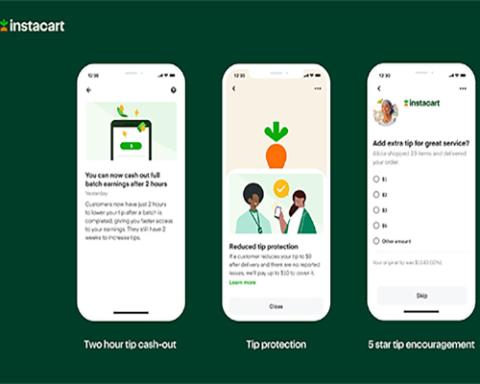 Instacart is releasing several new in-app features for its workers.

Instacart is updating how customers give tips on its platform to protect its workers from "tip baiting."

The online delivery service is releasing several substantial upgrades to the customer tipping process on its platform. These include a new tip protection offering which Instacart says will protect its workers (shoppers in Instagram speak) who fulfill online customer orders at partner brick-and-mortar stores from customers who remove a tip without reporting an issue with the order. The practice is known as "tip baiting."

The protection feature will apply when a customer “zeroes out” their tip after delivery without reporting an order issue. Instacart will cover the amount of the zeroed-out tip, up to $10.

Instacart is also unveiling several new features designed to encourage higher customer tips and make them easier for shoppers to provide. Moving forward, shoppers will be able to cash out their tips two hours after they deliver an order, a decrease from the current 24-hour window.

In addition, customers who rate their shopper five stars will be prompted to consider increasing their tip after checkout to recognize exceptional service from their shopper. According to Instacart, this feature has resulted in a 6% average increase in shoppers' earnings from tips on eligible orders as it has been gradually rolled out over the past few months.

Instacart is also developing additional batch types that are intended for shoppers to increase their earnings opportunities across the platform. Multi-store batches give shoppers the opportunity to shop from more than one store location in a single batch. Shoppers can also accept an add-on order while they are in the grocery store, adding another customer order to the batch they are already shopping.

Each of these batch types is currently being piloted in markets across North America, with more work underway to deliver new shopper features.

In addition, the company introduced a safety toolkit, designed to provide shoppers with immediate access to safety functionality including in-app emergency calling, incident reporting, and safety alerts, from one tap in the shopper app. Instacart is also unveiling a new in-app navigation feature, which will provide shoppers with an interactive map of the grocery store.

"We strive to equip shoppers with information on the best way to earn, so they can earn what they need, when they need it," said John Adams, VP of shopper & fulfillment product at Instacart. "It's our job to give shoppers the ingredients to earn on their terms — so they can understand when, where, and how to maximize their earning potential on our platform. With today's improvements to tipping and batching on the platform, we're making shopping with Instacart an even more reliable, profitable experience for the more than 600,000 individuals who choose to earn with us."