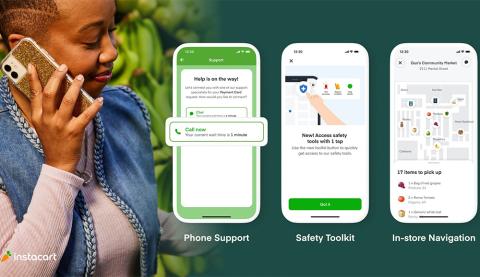 The online delivery platform will start providing live phone support, enabling shoppers (who fulfill online customer orders at partner brick-and-mortar stores) to call and speak with a care representative directly through the Instacart shopper app. According to Instacart, this will deliver one of the most-requested features based on shopper feedback and research.

In addition, the company is launching a safety toolkit, designed to provide shoppers with immediate access to safety functionality including in-app emergency calling, incident reporting, and safety alerts, from one tap in the Shopper app.

Instacart is also unveiling a new in-app navigation feature, which will provide shoppers with an interactive map of the grocery store. The map will include precise item locations and a more intuitive shopping list, with the goal of helping shoppers navigate the store and find items more efficiently. This feature is currently being piloted in more than 80 grocery store locations across North America, with more being added over time.

Other shopper features Instacart has introduced in the past couple of years include “tap and pay” capability directly from the Instacart app . The company also offered free personal protective equipment, as well as bonuses and vaccine stipends, during the earlier phases of the COVID-19 pandemic.

Instacart makes new shopper commitments
The company is also introducing four new commitments it says are designed to establish a foundation for ongoing improvements to its platform and further its relationship with its shoppers.

Instacart's first commitment is to “give shoppers support while they shop and beyond,” proactively providing them with support and safety to make their shopping experience as seamless as possible and protect them while they work.

Second, Instacart is committing to “give shoppers the ingredients to earn on their terms,” equipping them with information on how they best earn in a way that meets their individual needs.

Over the next four months, Instacart says it will launch four suites of product features, with one related to each of these commitments. Instacart has also launched a microsite that is available for shoppers to learn more about the features and programs being introduced. Starting in March and continuing each month through June, shoppers will receive an update about new product features that have been developed.

"The products we build for shoppers are developed with the goal of improving their experience and bettering our platform as a whole," said John Adams, VP of shopper and fulfillment product at Instacart. "The functionality we are introducing today will help keep shoppers safe on the platform and support them in every step of their shop, from the moment they accept an order until after it's delivered to the customer. Over the next several months, we look forward to introducing additional features based on direct shopper feedback, as we further our goal of offering the best possible shopper experience."