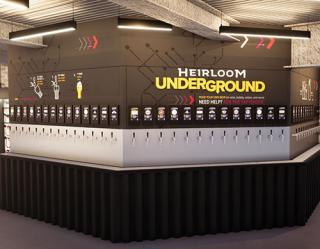 The supermarket company will open its third Heirloom Market store on Friday, Nov. 15, in the Northern Liberties neighborhood of Philadelphia. The two-level 13,000-sq. ft. location will feature the grocer's first-ever taproom and gaming area, with customers able to order via touchscreen.

The taproom, called “The Underground,” will be located in the lower level. The floor on the main level of the store will have windows that give shoppers a peek into the taproom below to encourage them to check it out. The taproom space will have more than 40 craft beers, wines, hard seltzers and hard kombucha on tap. It will also have a gaming area with classic arcade games, shuffleboard and a Scrabble Wall. Customers can sample an ounce or order a full pour of their beverage of choice from touchscreens that are located above each tap.

“As we created each Giant Heirloom Market, we listened to the community and let their feedback guide our plans,” said Tommy McClain, manager of the Northern Liberties Heirloom Market. “In our conversations, they told us they enjoyed having that third place away from home and work – a place to unwind, get a casual bite with friends, maybe have a drink or play a game. The Underground is our response to their wishes.”

Similar to the first two Heirloom Markets, the upcoming store will carry a wide selection of high‐quality, fresh, local and seasonal foods; convenient grab-and-go meals; a large gluten-free section; and a curated wine and beer offering with a rapid bottle chiller. It will feature items from Philadelphia‐area food purveyors.

The store’s tech features are designed to meet the needs of customers on the go. The offerings include Giant Direct, which gives shoppers to access thousands of items found in Giant stores that be ordered online for next-day pick up or delivery, and the Scan It! Express mobile app, providing meal inspiration, and the ability to assemble a shopping list and check items off as they shop.

The first Giant Heirloom Market opened January 25 in the Graduate Hospital neighborhood in Philadelphia. The second opened Aug. 2 in the city’s University City neighborhood. One more location – in Queen Village – is also planned.