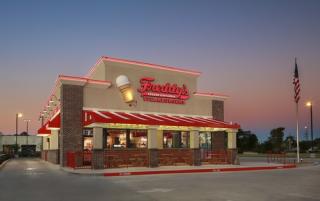 Freddy’s has more than 440 locations across 36 states.

Freddy’s Frozen Custard is accelerating its growth in key markets.

The fast-casual eatery signed a multi-unit development agreement to bring six new Freddy's restaurants in the Chicagoland area.  The expansion builds on the development success Freddy's had in Chicagoland earlier this year, adding 13 new locations to its pipeline for the market in the first quarter. Leading the Chicagoland development is veteran franchisee Asif Poonja, president and CEO of JAM Equities.

Freddy's has maintained strong development momentum in 2022 with 94 units added to its pipeline thus far and plans to grow its footprint in key target markets, including California, Louisiana, North Carolina, South Carolina, and Texas.

"The development success we've been able to achieve in Chicagoland is a testament to the incredible franchise groups who are bringing Freddy's to the market,”  said Andrew Thengvall, chief development officer at Freddy's. “We strongly believe that our newly formed partnership with JAM Equities will propel our growth even further.”

With over 25 years of experience owning and operating QSR concepts,  JAM have nine Popeyes restaurants in their portfolio, with eight in Iowa and one in Chicago. The group is set to further expand its footprint with the brand by developing four new units this year.

"Through our research, we confirmed that Freddy's is one of the fastest-growing franchises in its segment, and we believe it complements our other brands well," said  Poonja. "Since entering Chicagoland, Freddy's has proven to resonate across the market, and we've been fortunate enough to see the growth potential first-hand.”

Freddy’s has been adapting to the ever-evolving QSR industry, implementing strategies to meet the increased consumer demand for convenience and accessibility. Most recently, the company partnered with Creative Realities to launch digitalized menu boards, which is being used to provide a more seamless experience for customers through drive-thru solutions.

Founded in 2002, Freddy’s has more than 440 locations across 36 states nationwide. The company was acquired by private equity firm Thompson Street Capital Partners in March 2021.

Franchise opportunities for Freddy’s remain in areas across the U.S., including the Northeast, Upper Midwest, California, Florida, Oregon, and Washington; and large metro areas such as Pittsburgh and many of its surrounding markets.