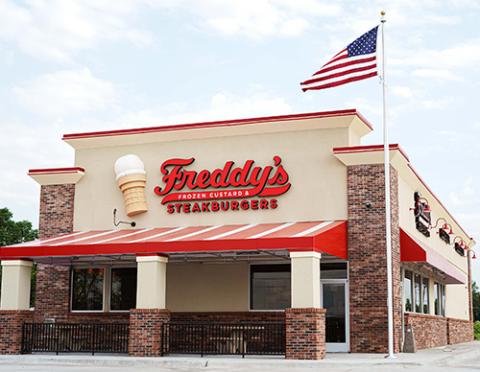 Freddy’s expects to open more than 50 restaurants in 2022.

Freddy’s Frozen Custard & Steakburgers has maintained its strong growth momentum in the first quarter of the new year.

The fast-casual chain has added 35 new units to its development pipeline since the start of the year. It is projected to open a total of more than 50 locations throughout 2022, with new restaurants across the country in states that include Arizona, Ohio and Virginia. Freddy’s is looking to double its footprint within the next four years, bringing the total unit count to 800 by 2026.

Most recently, Freddy’s is announced it is expanding in South Carolina, with plans to build four new restaurants in the Greater Myrtle Beach region. The company currently operates nine locations throughout the state. The Myrtle Beach development being led by veteran franchisee Rob Tanner of Custard & Steakburger Holdings.

"Our ongoing growth in South Carolina and throughout the Southeast is a direct reflection of our strong unit economics and leadership in the fast-casual space,” said Andrew Thengvall, chief development Officer at Freddy's. “Myrtle Beach has been a target market for Freddy's, and we look forward to opening new locations in the area as we continue to expand the brand's national footprint."

To continue its growth with non-traditional formats, Freddy's opened its first airport location in the Will Rogers World Airport in Oklahoma City.

Freddy’s has more than 400 locations across 34 states nationwide.