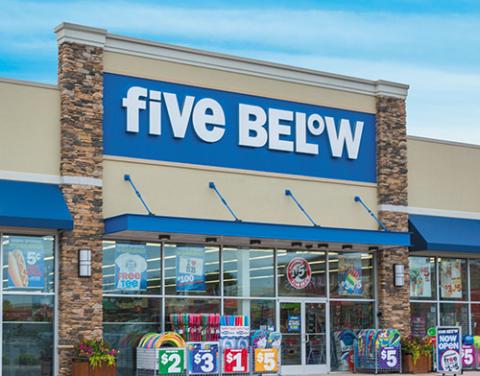 Five Below reported a better-than-expected third quarter during which it continued to expand its footprint as it entered two new states.

The tween and teen extreme-value retailer opened 40 new stores across 20 states in the quarter, finishing with 102 new stores opened year to date. In addition to entering new markets, Five Below opened its third Manhattan location, in Times Square.

Five Below has one of the most aggressive expansion programs in specialty retail. In March, the company said it was increasing its store potential in the U.S. from 2,500-plus to 3,500-plus locations,

In contrast to many other retailers, Five Below did not see its sales soften as the third quarter wound down.

"We had a better-than-expected third quarter and are off to a good start for the fourth quarter,” CEO Joel Anderson said on the company’s earnings call. “It remains a dynamic economic environment. However, Five Below is a resilient retailer."

“We delivered third quarter results that were better than our guidance in spite of the difficult macro environment and challenging year-over-year comparison,” stated Anderson in the earnings release. “Our performance was driven by ticket and transaction metrics that improved throughout the quarter, disciplined expense management and continued focus on our long-term Triple Double vision.”

During the quarter, Five Below opened stores in two new states, North and South Dakota, where it achieved two record fall grand opening results, Anderson noted. The company also completed its 2022 Five Beyond growth initiative with approximately 250 stores converted to its new store format. (Five Beyond, which evolved from the chain's "Ten Below" pilot, is a store section that features merchandise priced above the retailer's signature $5 price threshold.”)

“We are continuing to play offense, and the progress we made across product, experience and supply chain will all drive our holiday execution,” Anderson said. “With the completion of our five-node distribution network, we are set up to deliver products to our growing store base even more efficiently.”

Five Below raised its full-year profit forecast to between $2.97 and $3.02 per share, with revenues coming in just over $3 billion.

“The combination of our long runway for growth, industry-leading new store economic model, and strong balance sheet, combined with disciplined cost management, sets us apart and positions us to weather economic uncertainty, all while continuing to deliver on our strategic priorities to capitalize on the significant growth opportunity that lies ahead,” Five Below CFO Ken Bull said on the chain’s earnings call.