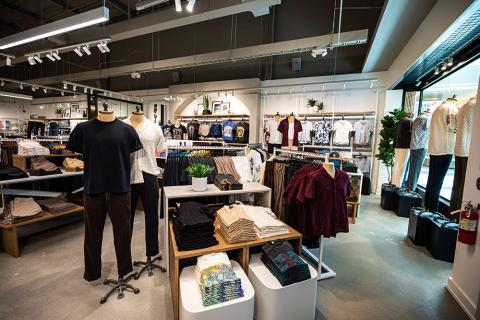 In separate news, the apparel retailer said that board member Nigel Travis will assume the role of chairperson effective January 28. He succeeds current chair Terry Burman, who will step down at the conclusion of the company’s fiscal year ending on January 28. Travis is the former CEO and chair of Dunkin Brands Group.

By banner, Abercrombie’s sales rose 10% to $422.3 million, which was the division’s highest third-quarter net sales since 2014 and the tenth consecutive quarter of average unit retail growth. Hollister’s sales fell 12% to $457.75 million.

“We were pleased to see year-over-year sales trends improve across brands in light of the global macroeconomic environment,” Fran Horowitz, chief executive officer, said in a statement. “We are cautiously optimistic as the holiday season kicks into high gear,”

Horowitz added that the company has “strategically” adjusted its inventory receipts for holiday and early-2023, and unlike last year, has inventory on hand to fulfill holiday demand in the peak holiday shopping period. Approximately 92% of the inventory is current.

“Additionally, we have reduced controllable spend where appropriate,” Horowitz said. “At the same time, we are leveraging our strong financial position to advance the long-term, strategic investments necessary to achieve our 2025 Always Forward Plan.”

Announced in June, A&F’s “Always Forward Plan” is focused on financial discipline and accelerating a company-wide “digital revolution” that includes expanding its investment in customer analytics. As part of the plan, the retailer is targeting annual revenues of $4.1 billion to $4.3 billion by the end of 2025.

For the full year, A&F now expects net sales to be down in the range of 2 to 3% from $3.7 billion in 2021. This compares to the previous outlook of down mid-single-digits. The outlook includes an estimated adverse impact of about 250 basis points from foreign currency, up from an estimated 200 basis points last quarter.

Nigel Travis served in executive leadership roles at several global companies within the retail and restaurant industries. A longtime leader at Dunkin Brands Group, Inc., including through its IPO in 2011, he served as CEO (January 2009 to July 2018) and executive chairman (May 2013 to December 2018) until transitioning to non-executive chairman (January 2019 to December 2020).

Travis also served as president and CEO and on the board of Papa John’s International (2005 to 2008), and in roles of increasing responsibility at Blockbuster, Inc., including president and COO (1994 to 2004)

“As a transformative business leader with experience growing multi-billion-dollar global brands, I’m confident in Nigel’s ability to help guide us through our next chapter as we continue to transform and position the company for future growth,” stated Horowitz.