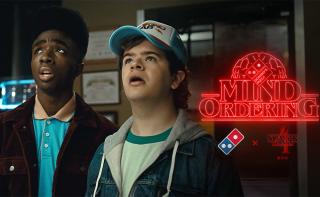 Domino’s is teaming up with “Stranger Things” in a new mobile promotion.

The world’s largest pizza retailer is launching a promotional tie-in between its mobile ordering app and the Netflix series “Stranger Things.” The Domino’s mind ordering app dominosmindordering.com delivers an immersive virtual experience that places customers as "test subjects" inside Hawkins National Lab in Hawkins, Indiana (a key fictional location from “Stranger Things”) in 1986.

To place an order using Domino's mind ordering app, customers must have a Pizza Profile (presaved payment and delivery information) with an existing saved easy order. Customers can also take part in the virtual mobile experience without placing an order.

Domino's new mind ordering app is available for download from the App Store or on Google Play. As part of the promotion, the retailer is also rolling out a retro 1980s pizza box for select medium and large pizzas for a limited time at stores across the U.S., while supplies last.

Domino’s continues exploration of metaverse
Domino’s new immersive mobile promotion is its latest use of the metaverse, an omnichannel space where consumers use augmented and virtual reality to digitally engage with each other and their surroundings, with crossovers into the physical world, as a marketing tool.

In June 2021, the retailer launched a TV advertising campaign reviving the “Noid,” a cartoon villain featured in its promotions in the 1980s and ‘90s. For a limited time, the retailer also sold one-of-a-kind NFT images based on tools the Noid used in the commercials, such as a “Pizza Crusher” and “Noid Balloon Blockade.”

The Noid-themed NFTs were sold over the course of a 14-day auction, in what Domino’s said was a scheme by the Noid to fund “future schemes.” As part of the promotion, Domino’s humorously asked customers to “please don't buy them.”

"Is mind ordering real? At Domino's – it absolutely is," said Kate Trumbull, Domino's senior VP of brand and product innovation. "Domino's customers and 'Stranger Things' fans can now channel their inner ‘Eleven’ by using telekinetic powers to order pizza with their mind."

"We're geeked to launch this first-of-its-kind mind ordering app, just in time for the premiere of 'Stranger Things' new season," said Trumbull. "Now hungry customers and 'Stranger Things' fans across the U.S. will get a taste of what it's like to be Eleven, and they may find some hidden surprises along the way, such as the Noid or Demogorgon."

Founded in 1960, Domino's Pizza is the largest pizza company in the world. It operates a global enterprise of more than 18,800 stores in over 90 markets. Domino's had global retail sales of nearly $17.8 billion in 2021, with over $8.6 billion in the U.S. and over $9.1 billion internationally.