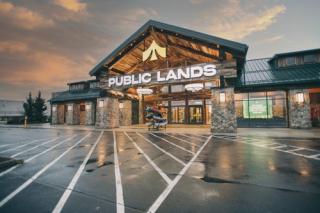 With retail locations designed to inspire and fuel a need to get outside, Public Lands  made its debut in September 2021, with a 50,000-sq.-store in the Pittsburgh suburb of Cranberry Township.  It was followed by locations in Columbus, Ohio,  and Charlottesville, Va.

In keeping with its dedication to land conservation, Dick’s said it will celebrate National Public Lands Day by doubling its 1% of sales giveback in-store and online for the week of September 18 through September 25. In its first year, Public Lands donated 1% of all sales to the Public Lands Fund, which has granted more than $500,000 to 15 local and national partners dedicated to conservation and increasing access and equity in the outdoors.

"When we first opened Public Lands, we set out to make a difference not just for our national public lands, but also for our local communities and organizations supporting outdoor recreation for all," said Public Lands president Todd Spaletto. "We're thrilled to be able to double our giveback in honor of National Public Lands Day to support the work of these organizations. We also can't wait to welcome people to our four new Public Lands locations, including our first stores in the southeast and northwest, where they can get the gear they need, find a community through our events, and celebrate public lands."

The Public Lands Fund is a program of The Dick’s Sporting Goods Foundation, a 501(c)(3) charity.