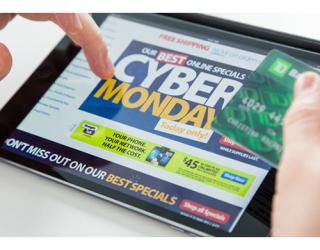 Based on data from Adobe Analytics, a record $9.4 billion was spent online by the end of Cyber Monday, an increase of 19.7% over last year, making it the largest online shopping day of all time in the U.S. and easily beating last year’s record of $7.9 billion. Between 10 p.m. and 2 a.m. ET, consumers spent $2.9 billion online, which was nearly a third of the day’s total revenue.

To date, a record $81.5 billion has been spent online so far this holiday season (11/1 – 12/2), compared to $71.5 billion that spent during the same time period last year, according to Adobe. The company is forecasting that online sales for the entire holiday season will hit $143.8 billion.

“Cyber Monday sales surged late last night as consumers established new records both in overall purchases and purchases made via smartphones,” saidTaylor Schreiner, principal analyst and head of Adobe Digital Insights.  “A strong 14.0% growth through the holiday season so far has put to rest any concerns of a retail-led recession this quarter as well as more recent concerns that winter storms might dampen online sales. The coming days will reveal if retailers will extend their holiday sales more than years past due to the shortest possible remaining shopping season till Christmas.”

Additional findings from Adobe around Cyber Monday include: