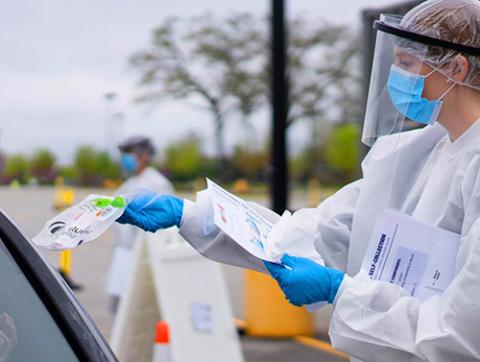 CVS Health is planning a dramatic expansion of COVID-19 testing in about a month’s time. And it’s not the only company doing so.

CVS, Walgreens, Walmart Inc. and Kroger Co. on Monday all announced expansions of COVID-19 drive-through testing sites, with CVS leading the charge.  Executives from the chains and other companies joined President Trump late Monday at the White House to announce the massive ramp up of the nationwide testing.

In mid-March, CVS, Walmart, Rite Aid and Walgreens were among the retailers that committed to opening up drive-thru test sites in the parking lots of their stores across the country. Their efforts to date have been somewhat hampered for various reasons, including a lack of adequate lab capacity.  On Monday, some of the retailers, including CVS,  warned that that ability to roll out the testing is still dependent of having adequate supplies and lab capacity.

“Our industry has been united by the unique role we can play in addressing the pandemic and protecting people’s health,” CVS president and chief executive Larry Merlo said. “We all share the same goal, and that’s dramatically increasing the frequency and efficiency of testing so we can slow the spread of the virus and start to responsibly reopen the economy when experts tell us it’s safe.”

Most of the retailers participating in the testing are operating the sites as drive-thrus in their store parking lots.  (No testing is done in stores). To get a test, people must meet the criteria of the Centers for Disease Control and Prevention and make an appointment.

Here is a look at the newly announced testing plans, by chain:

CVS Health
CVS said it expects to have up to 1,000 locations nationwide offering self-swab COVID-19 testing by the end of May, with the goal of processing up to 1.5 million tests per month. It noted, however, that the expansion is “subject to availability of supplies and lab capacity.”

The testing will be scheduled online and take place at select CVS Pharmacy locations in parking lots or at drive-thru windows. Employees participating in the test collection process will maintain safety using personal protective equipment and follow sanitization protocols after each test, CVS said.

CVS Health currently operates large-scale COVID-19 rapid test sites in five states, which were opened through partnerships with the Department of Health and Human Services and governors in Connecticut, Georgia, Massachusetts, Michigan and Rhode Island. Most of the parking lot sites can accommodate up to 1,000 tests per day, and sites are overseen by licensed health care providers from MinuteClinic, the retail medical clinic inside CVS Pharmacy locations, with assistance from CVS pharmacists and other employees.

Walgreens
Walgreens plans to open COVID-19 drive-thru testing locations in 49 U.S. states and Puerto Rico, with the scale and timing of the overall testing expansion is dependent on the availability of tests and overall lab capacity. Once all sites are fully operational, the company expects to test more than 50,000 people each week.

To date, Walgreens has opened 18 COVID-19 drive-thru testing locations across 11 states. It expects to have 23 sites open in 15 states by the end of the week.

As it expands testing, Walgreens said it will focus its efforts on improving access to testing in underserved communities. In addition, over time it will also be working with companies to provide testing to employees, to help more businesses re-open in the weeks and months ahead.

Walgreens said its planned expansion is being made possible through the retailer’s partnership with LabCorp, with the companies furthering their relationship in order to triple Walgreens’ current testing capacity.

“We are bringing the full force of LabCorp’s science and testing capabilities to serve individuals across the U.S. whether they had the virus or believe they have the virus,” said Adam Schechter, president and CEO of LabCorp.

Drive-thru testing is available by appointment only, and only to individuals who meet eligibility criteria established by the Centers for Disease Control and Prevention.

Kroger
Kroger Health, the healthcare division of The Kroger Co. plans to expand its drive-thru COVID-19 testing model to 50 locations in more than 12 states to perform up to 100,000 tests by the end of May.

To date, Kroger Health has performed nearly 8,000 tests in 30 locations in Colorado, Indiana, Kentucky, Michigan, Ohio and Tennessee. The company has also launched a pilot for site-specific testing for company associates in Michigan and Colorado.

Walmart
The nation’s largest retailer is currently supporting 20 testing sites in 12 states. It will open approximately 25 more sites this week, and by the end of May, it anticipates operating more than 100 sites, “assuming there is adequate lab capacity. “With 100 sites, Walmart said it can bring 20,000 tests a week to people who need them, especially in hot spots and underserved areas.

In addition, as new tests emerge–including both nasal and saliva tests to identify if a person has the virus and blood-based (serology) tests looking for antibodies to determine if someone has recovered—and as testing capacity becomes more readily available and it can secure more kits—Walmart said it will be able to utilize our pharmacies to distribute and collect tests at much greater volume.