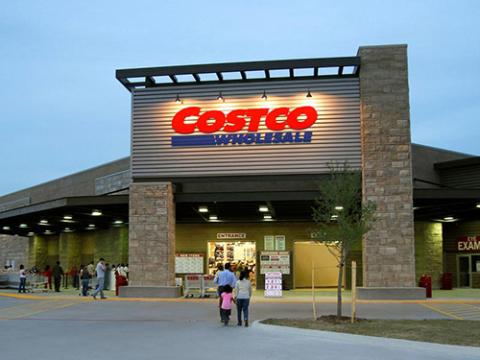 Costco is collaborating with Instacart north of the border.

The warehouse club giant is launching a nationwide marketplace and enterprise partnership with Instacart in Canada, following a successful two-month pilot in select Ontario stores. Same-day delivery is now available from 76 Costco stores in Canada via the Instacart marketplace.

The new partnership brings Costco’s selection of groceries, pantry staples and household essentials to the customer’s door in as little as two hours, and is available to members and non-members alike. The companies have also introduced Costco’s new Canadian member-only website – built and powered by Instacart Enterprise – featuring member benefits and access to same-day delivery via Instacart.

''With Instacart, we can bring even more benefits of a Costco membership to our valued members'' said Pierre Riel, senior VP and country manager, Costco Wholesale Canada. ''Instacart delivery will help us serve more families than ever before and we see this new offering as a great complement to our two-day grocery delivery service that launched in 2018.''

“Grocery delivery has become essential for millions, and we’re proud to make same-day delivery from Costco available to even more Canadians. Now, through the Instacart marketplace and Costco’s new member website, families across Canada can get the groceries and goods they need, delivered to their door in a matter of hours,” said Andrew Nodes, VP of retail, Instacart. “We want to help retailers reach their customers when, where and how they want to shop. With this launch, we’re extending the reach of Costco in Canada and making it possible for Costco members and non-members alike to access same-day delivery of Costco’s broad selection of groceries and goods.”

Customers can shop from Costco via Instacart today by going to the dedicated Costco page on the Instacart site, opening the Instacart app on their mobile device, or visiting the same-day delivery page of Costco’s member-only e-commerce site. From there, customers select their city and Costco warehouse, and can begin adding items to their Instacart grocery cart. An Instacart shopper will pick and deliver the order within the customer’s designated timeframe.