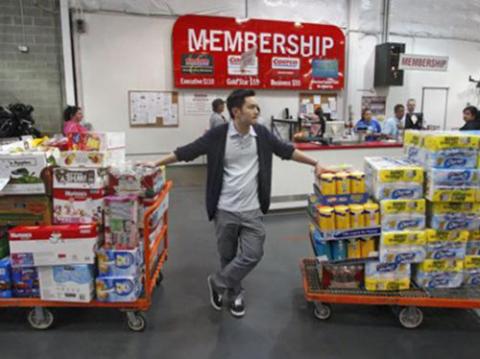 Costco Wholesale Club’s first-quarter sales rose as customers stocked up on bulk grocery items and other essentials during the early states of the pandemic. But demand dropped off in April amid social distancing measures and increased stat-at-home orders.

Net sales increased 7.3% to $36.45 billion from $33.96 billion last year. Total same-store sales rose 4.8%, or 7.8% excluding gasoline prices and foreign exchange, with a 5.9% increase in the U.S. (Total same-store sales, for the four weeks that ended May 3, however fell 4.7% reflecting the increased demand.) Average ticket increased 9.3% during the quarter, CFO Richard Galanti said on Costco’s earnings call.

Among other measures to promote the safety of customers and employees during the pandemic, Costco closed or limited some departments such as optical and hearing aids, which hurt sales. It also stopped its popular sampling program. On the call, Galanti said a modified version of the program will be slowly rolled out in mid-June.

“We’re going to start doing some things in mid-June on a slow rollout basis in sampling,” Galanti said. “I can’t tell you anymore, but needless to say it’s not going to be where you go and just pick up an open sample with your fingers.”

Costco currently operates 787 warehouses, including 547 in the United States and Puerto Rico, 100 in Canada, 39 in Mexico, 29 in the United Kingdom, 26 in Japan, 16 in Korea, 13 in Taiwan, 12 in Australia, two in Spain, and one each in Iceland, France, and China. Costco also operates e-commerce sites in the U.S., Canada, the United Kingdom, Mexico, Korea, Taiwan, Japan, and Australia.