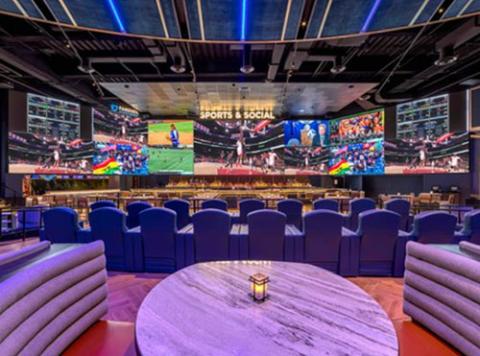 A new dining and entertainment concept will be built at Miami’s largest outdoor shopping center.

The Cordish Companies, the developer of Ballpark Village outside of the St. Louis Cardinals’ Busch Stadium and Live! Casino at CBL’s Westmoreland Mall, has signed an agreement with The Taubman Realty Group to build a 30,000 sq. ft. outdoor plaza and 32,000 sq. ft. of interior space at Dolphin Mall that will be anchored by Sports & Social, which is also a tenant at Ballpark Village several other sports venues in the United States. To be opened next winter, the space will offer live music, sports watch parties, family events, and food and beverage festivals and more.

"Dolphin Mall is already the market-dominant shopping and dining destination in Miami," said Taubman president and COO William Taubman. "Working with The Cordish Companies to bring this new concept to the mall is just one of the ways in which we will ensure it remains fresh and exciting for customers and sees continued success well into the future."

Outfitted with state-of-the-art audio-visual technology, the 15,000-sq.-ft. Sports & Social space will present an LED display that allows for the simultaneous viewing of multiple games and sporting events.

A 111-year-old, privately held company in its fourth generation of family ownership, Cordish was the original development partner of the Seminole Tribe of Florida for Hard Rock Hotel & Casino Hollywood and Hard Rock Hotel & Casino Tampa. It was recently tapped to develop an entertainment concept for The District at Veridian, a 225-acre mixed-use project being developed by UrbanStreet Group in Schaumburg, Ill.