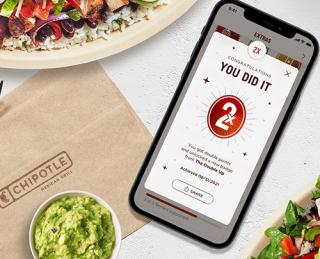 Chipotle is officially rolling out Extras, an exclusive feature for members of its rewards program.

Chipotle Mexican Grill is building on the success of its Chipotle Rewards loyalty offering with a new feature that that unlocks access to extra points.

On Wednesday, Sept. 1, Chipotle officially rolled out Extras. This new loyalty feature gamifies Chipotle Rewards with personalized challenges to earn additional points and collect achievement badges. Chipotle said it is the first national restaurant brand to launch badges as part of its loyalty program. To celebrate the launch of Extras, Chipotle Rewards members can get double points on a purchase through Friday, Sept. 3.

Chipotle Rewards members can access Extras by visiting their profile on the Chipotle app or website. Members can participate in Extras to earn extra points toward rewards, as well as collect all-new achievement badges. Points can be redeemed for a variety of rewards in the Rewards Exchange for free menu items, apparel, and more.

The launch of Extras marks the second time during the summer of 2021 that Chipotle has introduced a gamified feature of its Chipotle Rewards program. In June, the quick-service retailer rolled out a limited-time video game called Chipotle Race to Rewards Exchange.

Part of Chipotle Rewards, the interactive racing game challenged players to earn game points and avoid obstacles for a chance to win a 2021 Tesla Model 3 and other prizes. Through the 48-hour Rewards Exchange promotion, Chipotle Rewards members were able to unlock more rewards, more often.

Initially piloted in late 2018, the Chipotle Rewards program now has 24 million members. To customize user experiences, the company employs a sophisticated, hyper-personalized CRM program. Using the system to analyze customer purchase histories, the company can better target communications, such as birthday rewards and incentives that drive trials, menu exploration and brand affinity, according to Chipotle.

The Chipotle Rewards program now has 24 million members. According to Chipotle, it remains among the fastest-growing loyalty programs in the history of the restaurant industry.

Chipotle Rewards members earn 10 points for every $1 spent in the restaurant, online, or in the app – and now with Extras, can have chances to earn more. Members can redeem their points in the Rewards Exchange, choosing from more than 15 different reward options including free guacamole, drinks, and branded apparel. Members can also redeem their points to support a variety of Chipotle's non-profit partners, such as The Farmlink Project, National Young Farmers Coalition, and the National Urban League.

Chipotle had over 2,850 restaurants as of June 30, 2021, in the U.S., Canada, U.K., France, and Germany, and is the only restaurant company of its size that owns and operates all its restaurants. Chipotle was recently honored as one of Chain Store Age’s 2021 Breakout Retailers.