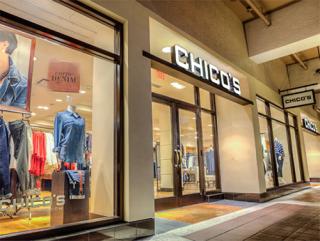 A $2.1 million in charges related to the right-sizing of Chico’s stores and $2.8 million in severance paid to former employees were among the one-time costs that cut into Chico’s quarterly profit.

Total same-store sales were down 2.2%. By brand, same-store sales fell 3.6% at Chico’s and 5.7% at White House | Black Market. But same-store sales jumped 11.3% at the company’s intimates brand, Soma, on top of 10.9% growth last quarter. It was Soma’s fifth consecutive quarter of growth.

During the quarter, Soma held its 15th anniversary sale, which attracted 60,000 new customers to the brand in two days, executives said on Chico’s quarterly earnings call with analysts.

“We have strategically invested in marketing, at Soma, which has helped generate growth in both new and existing customers,” said Mary van Praag, president of the intimates group, on Chico’s quarterly earnings call. “In particular, we’ve been very successful with our digital, paid social and public relations efforts to build the awareness of the brand in the minds of consumers.”

In January, Chico’s announced it planned to close 250 stores during the next three years and target digital growth. As of Nov. 2, the company owned and operated 1,373 stores in the U.S. and Canada. It also sold merchandise through 89 international locations in Mexico and two domestic franchise airport stores.

On the call with analysts, Bonnie Brooks, Chico’s CEO and president, attributed the better-than-expected results in the third quarter to several factors, and said the company is making significant progress on its strategic initiatives designed to improve its merchandise, customer experience and its bottom line and value to shareholders.

"I am pleased with our progress this quarter as evidenced by our results," Brooks said. "I firmly believe the company is on the  right course and that changes we are making to the business overall will reposition Chico's FAS for a sustainable, profitable financial performance, not just for the short-term, but the longer-term future, and deliver enhanced shareholder value."

Brooks, who took the helm of Chico’s in the second quarter, has been reorganizing the company’s corporate structure. Three senior vice presidents, all with extensive experience in retail with such companies as Gap Athleta, J. Jill, and Anthropology, have been brought on board to oversee the design and merchandising functions at each of Chicos’ three brands.