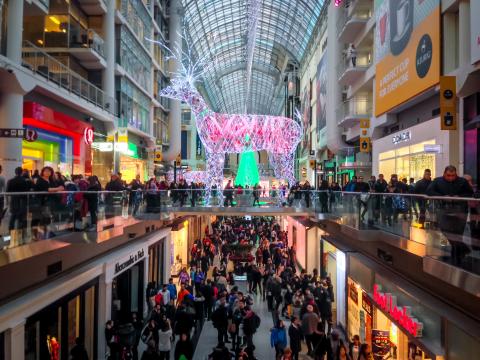 Heavy discounts on apparel and high demand for visits with Santa negated predictions that Black Friday weekend would not match last year’s bountiful start to the holiday season.

A CBRE Retail Property Management survey of personnel at 13 of the malls, outdoor, and mixed-use centers managed by the global retail services company revealed that traffic was higher and sales were greater than they were in 2021.

With supply chain delays in remission, discounts of up to 50% on apparel had holiday shoppers lined up at specialty stores, according to those surveyed. Categories also turning in strong results over the weekend were home décor, jewelry, and beauty.

“Shoppers gravitated to heavy discounts and to traffic-drivers like Santa visits and selfie-inspiring experiences, which we anticipate will continue to attract foot traffic throughout the season,” said CBRE head of retail research for the Americas Brandon Isner.

The supply chain issues that plagued retailers during Holiday 2021 are not an issue this year. Retailers who put in heavy orders early to avoid missed sales opportunities saw their strategies paying off during the kickoff of the holiday season, according to CBRE.

Bookings for the Santa-for-hire business rose 121% from 2019 to 2021 and growth was reportedly up further in advance of the 2022 holiday season, according to Mitch Allen, owner of Hire Santa.

With inflation still ramping up, buy-now-pay later services are being offered by more retailers to allow consumers to take advantage of aggressive discounting. Their deeper dive into omnichannel with expanded BOPIS programs and mobile phone promotions is also paying dividends.

Three-quarters of online consumers used cellphones to place orders during last year’s Thanksgiving weekend, an increase of 22 percentage points compared to 2016. A recent report on the habits of successful physical retail centers from the cell tower traffic-tracking company Placer.ai noted that one of their most successful strategies was meshing online and physical shopping options.

“If a retailer schedules a special “discount day” at their store location, they can launch a similar offer on their local app, providing the same opportunity to consumers who might not be able to make it to the store that day,” according to CBRE’s Isner.

He predicted that last weekend’s low prices will continue to be available to shoppers throughout the holiday season.

“Price inflation will remain a headwind for shoppers, Isner said," so it’s likely that discounts will play a sustained role in generating interest this season.”