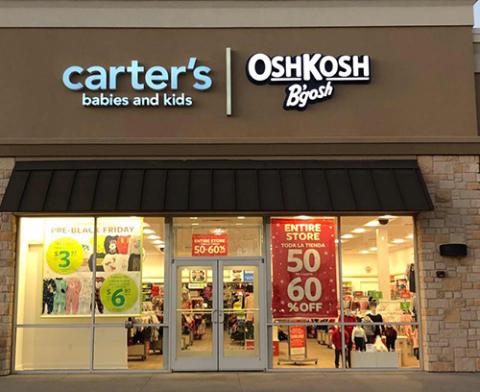 Carter’s is closing a big chunk of its store base but it isn’t giving up on new store growth.

The infant and young children’s clothing company operates about 850 stores in the U.S., Canada and Mexico under the Carter’s and OshKosh B’Gosh banners, including co-branded locations. Speaking on the company’s earnings call on Friday, CEO and chairman Michael Casey said Carter’s will close about 25% of its stores — or 200 or more locations — as the leases come up for renewal or where there is a kickout provision.

At the same time, Carter’s will continue to open stores located in more densely populated areas, in better centers with better margins. It plans to open nearly 100 co-branded Carter’s-OshKosh stores during the next five years.

“Our focus is fewer, better, more profitable stores located close to the consumer that have a higher likelihood of serving those omnichannel consumers, those who love to shop online and swing by the store and pick up the product,” Casey said. “Going forward, we expect our stores will play an important role supporting our e-commerce customers.”

Currently, about 85% of Carter’s stores in the U.S. are located in open-air centers, giving it an advantage relative to its mall-based competitors, according to Casey.

Casey’s said that Carter's is an attractive tenant.

“Our brands are viewed as traffic drivers and bring families with young children into the shopping centers,” he said. “As other retailers struggle and downsize, new and more attractive real estate opportunities become available to us. It's a buyer's market, and we plan to pursue those better opportunities in better centers that provide convenience for our consumers and a high-return on investment for our shareholders.”