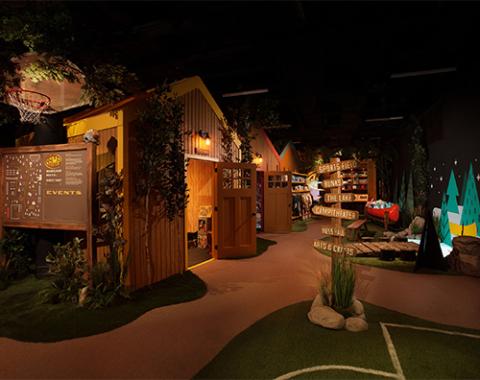 Camp will open its first location on the West Coast, at Century City in Los Angeles, on April 23.

Camp is planting its flag in the City of Angels.

The experiential retailer, which is part toy store and part family activity center, is opening its first location on the West Coast, at Century City in Los Angeles, as part of its national expansion.  It will be Camp’s ninth store overall and the first of many on the West Coast, the company said.

Opening on April 23rd, the 7,000-sq.-ft. Century City outpost will feature a curated “canteen,” or retail space, selling toys, gifts, books and accessories for all ages. The area will feature Camp’s signature “Magic Door,” a speakeasy-style pivoting wall that leads to interactive themed experiences that will change seasonally.

The new Camp location will open with the company’s signature theme of Base CAMP. If offers an immersive summer camp-themed experience where kids will go from cabin to cabin, enjoying signature arts & crafts, sports, dance, theater and more.

In addition, Camp has partnered with Barbie and peer-to-peer RV rental marketplace RVshare to create one-of-a-kind experiences designed specifically for the LA community, including an in-store Barbie-themed disco cabin to an interactive RV campsite.  Visitors of all ages will be able take part in camping-themed play and nature activities, such as RV-inspired activity books showcasing the wonders of hitting the open road for summertime family vacations. Camp will also host free themed activities in partnership with Barbie, RVshare and Visit California.

“Families have very few places that become part of their routine where they can have fun, escape, and build memories together,” said Ben Kaufman, founder and CEO, Camp, which was honored as one of Chain Store Age’s 2022 Breakout Retailers. "Los Angeles has been at the top of our wish list for several years, and we are incredibly excited to build our community on the West Coast."

Camp recently announced it is partnering with Disney to open “Mickey & Friends x CAMP: An Extra Big Adventure," at its Fifth Avenue flagship in New York City. The collaboration is the first of several Disney-themed experiences that Camp will launch in 2022 and travel to other Camp locations later this year and beyond.

Launched at the end of 2018, Camp has nine retail locations in New York, New Jersey, Massachusetts, Texas, California and Connecticut.