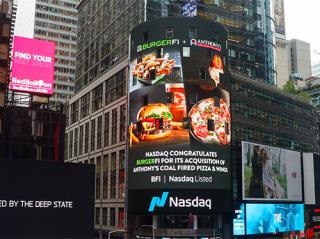 As partners, BurgerFi and Anthony's intend to present a pair of high-flying food brands to retail center operators. (Photo courtesy of BurgerFi)

BurgerFi, the 120-store chain where one can get a double-patty, Wagyu beef burger for $11.27, has made an agreement to purchase Anthony’s Coal Fired Pizza & Wings and direct a joint expansion of the two chains focused on the eastern half of the United States.

The $161.3 million deal was made with LCatterton, the consumer product investment firm that financed the rise of Punch Bowl Social and P.F. Chang’s, as well as Anthony’s.  L Catterton will become one of BurgerFi’s largest shareholders and will hold a seat on its board.

Both chains had their beginnings in Florida and have been expanding up the East Coast, though BurgerFi CEO Julio Ramirez, who once directed Burger King’s Latin American business, says the company is poised to expand to areas where the greatest opportunities lie.

“We’re actively growing and have about 15 restaurants under construction, but we’ve done a lot of second-generation locations in buildings where other brands didn’t make it through the pandemic,” Ramirez said. “We’re beginning to plan international locations now. It’s not a big stretch to go to South America, though it probably won’t be next year.”

The companies complement each other with expertise in different areas of foodservice operation. Anthony’s has 61 locations, nearly half of which are in Florida.  Anthony’s stores are all company-owned, while BurgerFi expanded with franchising but has widened its company-owned portfolio to about 20 locations.

“I think we’ll be able to show up in discussions with developers having two different brands which are arguably number one or two in their categories in most markets we’re in,” said Anthony’s CEO Ian Baines, who ran Cheddar’s Scratch Kitchen, a Darden brand, for five years before joining Anthony’s.

Ramirez feels that both chains have distinctive menus that appeal to retail real estate developers striving to widen the assortment and the appeal of their food and beverage tenants.

“We think our menus are superior,” he said. “We use grass-fed Angus beef. We have a plant-based burger made from vegetables supplied by local farmers and it’s 10% of our sales.  And Anthony’s has coal-fired pizza and those outstanding wings.”