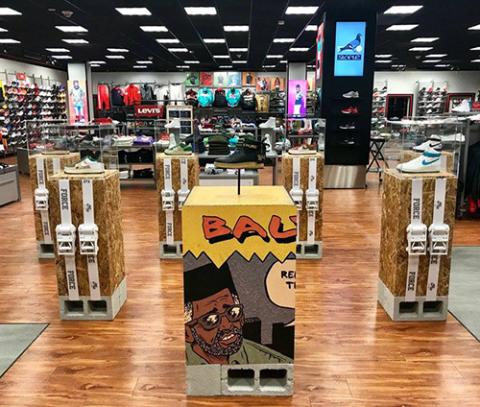 JD Sports, the owner of The Finish Line, continues to expand its U.S. retail portfolio.

The British sporting goods giant said that it has entered into a conditional agreement to acquire Baltimore-based athletic footwear and streetwear retailer DTLR Villa for approximately $495 million in cash (of which about $100 million will be used to repay existing company debt). The deal comes less than two months after JD Sports bought Shoe Palace, which is based in California and operates approximately 165 stores.

DTLR, which is currently majority owned by BRS & Co. and Goode Capital, was established in 1982 under the name Downtown Locker Room. The company later rebranded as DTLR and, in 2017, acquired Sneaker Villa Inc. DTLR currently operates 247 stores across 19 states, primarily in the north and eastern parts of the United States.

Once the acquisition is completed, Glenn Gaynor and Scott Collins will remain in their roles as co-CEOs of DTLR. They will also reinvest a portion of their proceeds into the company in exchange for a new 1.4% minority stake.

“This is another exciting milestone in the group’s development in the United States,” stated JD Sports Fashion Plc executive chairman Peter Cowgill. “Like Shoe Palace, DTLR pride themselves on the deep connection they have with their consumers and the active role they play in the communities that they serve. As such, we intend to retain the DTLR Villa fascia and its proposition. The acquisition of DTLR will enhance our presence in the north and east of the United States, and will be another important step in the group’s evolution.”

In 2018, JD Sports acquired The Finish Line https://chainstoreage.com/breaking-news/finish-line-acquired-european-retailer in a deal valued at $558 million. The British retailer recently opened a flagship in New York City’s Times Square.  The U.S. market now accounts for more than a quarter of the company’s total sales.