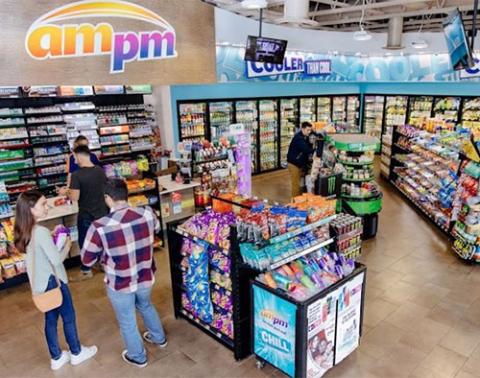 The first ampm store on the East Coast has opened in the Bronx.

BP has opened the first East Coast location of its ampm convenience store brand, in the Bronx borough of New York City. The BP-owned and operated store is one of four scheduled ampm openings on the East Coast, in a move that supports BP’s strategy to grow its convenience business.

The Bronx store features BP branding throughout the fuel experience and ampm's food menu, including a hot deli and grocery with fresh fruit and extensive dry goods. The experience is modeled after Thorntons, the Kentucky-based fuel and convenience retailer that BP took full ownership of in 2021. (The acquisition marked BP’s re-entry into company-owned, company-operated retail.) Thorntons includes more than 200 owned and operated locations across six states: Kentucky, Illinois, Indiana, Ohio, Tennessee and Florida.

“This store sets the stage for us to maximize the large BP footprint along the East Coast," said Greg Franks, senior VP mobility and convenience, Americas, BP.

The first ampm location opened in Southern California in 1978. Today, there are more than 1,000 stores throughout the West Coast, making ampm the seventh largest c-store chain in the U.S.

"As BP transitions toward becoming a net zero company, convenience will play a huge role in delivering our integrated strategy,” said Dave Lawler, chairman and president, BP America. “The experience customers feel at our retail sites will be key to attracting them in and ensuring they return. Because New Yorkers are always on the go, the Empire State is a perfect fit for this expansion.”

BP aims to increase the number of convenience sites in its global network from approximately 2,000 today to more than 3,000 by 2030.  The company’s mobility and convenience brands in the U.S. include BP, Amoco, ampm and Thorntons.