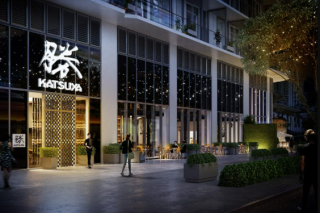 Black Lion's purchase of this 11,000-sq.-ft. space in Brickell will be followed by more Miami acquisitions.

The Black Lion Investment Group spent $38 million on retail real estate in Miami in the last two months and has another $100 million to invest in what it sees as a market of growing importance.

“Miami, and Brickell in particular, is on a trajectory to evolve into the Manhattan of the Southern United States,” said Black Lion principal Robert Rivani, who just closed on a $13.5 million purchase of the 11,000-sq.-ft. space at the SLS LUX Brickell building.

“When you examine what people are most willing to get out of the house and spend time and money on post-pandemic, it’s largely the hospitality experiences that simply cannot be recreated at home,” Rivani said. “We’re betting on Miami’s year-round residents and visitors continuing that trend indefinitely.”

The space is located on the ground floor of the SLS LUX Brickell, a design-forward hotel and condominium building adjacent to Brickell City Centre, the luxury living, shopping, and dining neighborhood that Swire erected in the city’s financial district five years ago. Black Lion intends to put another restaurant in the space but released no details on the concept.

A press release from Black Lion expressed Rivani’s “absolute enthusiasm” for Miami’s future, and noted that the company plans to spend another $50-to-$100 million dollars snapping up high-visibility properties there in the coming months.

Black Lion owns mostly outdoor centers in high-population states such as California, Florida, Georgia, and Texas. Other notable company projects include an adaptive re-use renovation of the Wynwood Arcade in the Wynwood Arts District, along with a reimagining of the Brickell Bay Boardwalk.

The new restaurant at the SLS LUX Brickell is scheduled to be opened late this year or early in 2022.