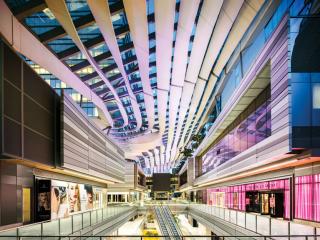 Want a glimpse of retail real estate’s promise for consumers in the 21st century? Start with these two breakout centers.

Brickell City Centre (Miami): It’s said they don’t build enclosed malls anymore. There’s a kind of roof over Brickell City Centre, which opened in 2016 in Miami, but what a roof it is. The undulating “Climate Ribbon” covering the 500,000-sq.-ft. retail portion of Swire’s billion-dollar mixed-use project protects visitors from inclement weather while allowing outside air to flow into the center. It also collects rainwater for reuse, and streams glare-free natural light onto the promenades.

BCC may be the new prototype for luxury centers for another reason: It encompasses Miami’s Eighth Street Metromover station. The 200-year-old, China-based Swire insists its developments be situated on mass transit lines. Before breaking ground in Brickell, Swire negotiated a deal with the city of Miami to manage and maintain the station for the next 98 years.

“Now developers talk about transportation-oriented developments, putting centers in areas where consumers can shop while commuting from point A to point B,” according to A.T. Kearney partner Michael Brown.

Debora Overholt, Swire VP of retail in the United States, holds that the site makes the project and the project makes the new Brickell City neighborhood.

“For people who want to work, play, and stay and still be able to hop downtown, this is the place to live in Miami,” Overholt said. “The City Centre serves diverse needs. There’s Saks and there’s Zara. We have a dine-in movie theater and an Italian-themed food hall.”

Fitness? How about a 30,000-sq.-ft. Equinox fitness club and a UCLA Health clinic?

Westfield spent $1 billion remaking Century City into a consumer magnet to last throughout the 21st century. Even the parking is deluxe at the legendary mall, where a tech-driven platform alerts arriving motorists to open spaces on various garage levels.

“There’s a cachet and a halo to Century City that we’ve always wanted to achieve, and now we have it,” said David Ruddick, Westfield executive VP of leasing.

Some of the billion bucks, of course, went toward amenities for tenants. A state-of-the-art digital media network allows retailers to advertise on eye-level 75-inch screens scattered throughout the property and gain access to what Westfield calls “unprecedented” audience measurement capabilities.

“We’re out of the mall business and into city centers,” Ruddick said. “Community and culture — if you have that right and become that place, then commerce happens naturally. Stacking brands on brands is not considered by our customers to be a meaningful experience.”