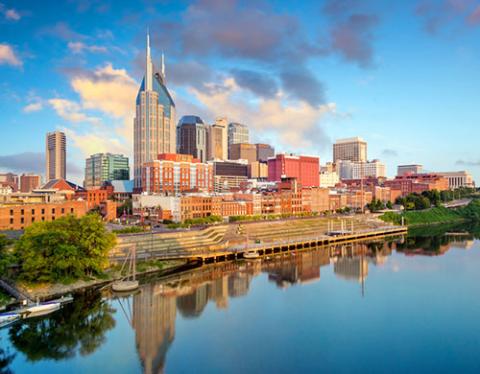 With a nearly 63% growth in rental rates since 2011, Nashville is the top momentum market.

Retail’s journey from underdog to a favored asset class has continued into the second quarter of 2022.

That’s according to a new report from a report by JLL Capital Markets, which said that increased occupancies, population growth and low delivery of new product mixed with high construction costs are all driving market rent growth for retail, making the sector even more attractive to investors. Several markets show they have the most momentum for rent growth, with four emerging ones identified as having the most potential.

The top eight markets with high population growth are also leading when it comes to rental growth. With a nearly 63% growth in rental rates since 2011, Nashville is the top momentum market, followed by South Florida at 47.1% and Austin and Tampa both at 39%.

Other top markets for rental growth include Denver with 37% and Charlotte, Dallas-Fort Worth and Raleigh-Durham all-around 30% rental growth. These momentum markets have seen rental growth since 2011 above the national 10-year rent growth of 27.7% along with a population growth above the 10-year national average of 7.4%.

“Retail follows consumers, rent growth follows both, and investors follow all three,” said senior managing director Danny Finkle, JLL’s retail co-leader in capital markets. “When we look at the traditional underwriting of retail, we look at 10-year cash flows and aim to be able to predict about 2 to 3% annual rent increases. These markets are already outperforming right now, and their market dynamics suggest they will continue to do so.”

Rental growth is aided by the continued rise in occupancy that has yet to be offset by retail deliveries, which peaked in 2017 with nearly 30 million square feet delivered across those momentum markets. As deliveries have decreased each year since 2017 – with one notable exception in 2020 – occupancy has increased to its year-end 2021 level of 95.5%.

This year kicked off with a positive retailer outlook due to store openings outpacing store closings for the first time after three years of consecutive net closures. Year to date, only 11 retailers have announced roughly 720 store openings over the next two years with only 47 closures.

Additionally, the net absorption in growth markets like Dallas-Fort Worth, Atlanta, Tampa, Phoenix, Charlotte, Denver, and Orlando is exceeding most of the traditional markets.

“The reality is, with so little new retail construction, there is upward pressure on rents across the country for high-quality retail,” said senior managing director Chris Angelone, JLL’s retail co-leader in capital markets. “Owners and investors will see outperformance across their portfolios.”

Analyzing CoStar data, JLL Research identified four markets on the precipice of outpaced retail rental growth. Analysts predict Las Vegas, Orlando, Salt Lake City and the Boise MSA to have double-digit rent growth between 12 and 21% before 2025. These markets are in the middle of population growth booms, with 14 to 26% increases in residents, and are key areas identified for future investor demand.