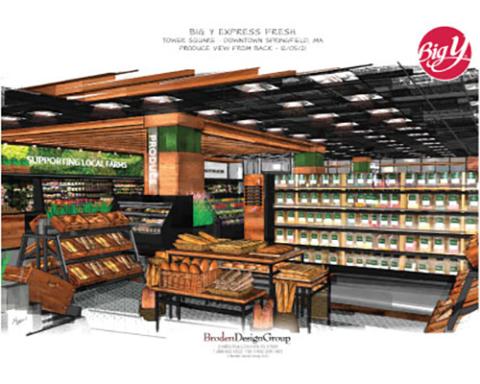 The New England grocer will introduce a downtown format, called Big Y Express Market, as part of the Tower Square development in Springfield, Massachusetts. The 10,000-sq.-ft. store will be tailored to fit the needs of the city’s downtown community. The area is home to UMass classrooms, YMCA daycare, office workers and residents, many who have not previously had access to convenient options that are nutritious and affordable, according to Big Y.

The small-format market will carry items from all the standard grocery departments, but not complete assortments. The offerings will include high-quality prepared meals and sandwiches, natural & organic products and everyday necessities. In addition, there will be an in-house sushi chef preparing fresh sushi daily.

“We are excited to bring an entirely new concept to downtown Springfield,” said Colin D’Amour, senior director, Big Y Express. “We know that there has been an appetite for Big Y’s fresh and local foods for many years now. We are working diligently with our contractors to establish a timeline for opening and are excited to be a part of the downtown community.”

Big Y Foods is one of the largest independently-owned supermarket chains in New England. The company operates 85 locations throughout Massachusetts and Connecticut including 71 supermarkets, Table & Vine Fine Wines and Liquors and 13 Big Y Express gas and convenience locations.