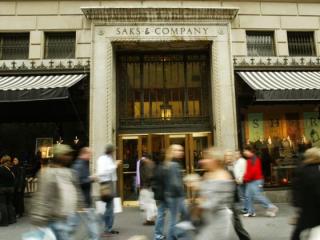 The owner of Saks Fifth Avenue is splitting off the luxury department store retailer’s e-commerce business into a separate entity, a move that reflects the growing dominance of online shopping and that could be a prelude to spinning off the online site into a public company.

The Hudson’s Bay Company (HBC) and venture capital firm Insight Partners have entered into a partnership that establishes Saks’ e-commerce business as a standalone entity to be known as Saks. Insight Partners has made a $500 million minority equity investment in Saks, valuing the business at $2 billion.

The retailer’s 40-store fleet will operate separately as a company called SFA, which will remain wholly owned by HBC. As separate but related sister companies, Saks and SFA will be better able to appropriately plan for and invest in their respective service models, HBC said.

Saks Fifth Avenue will remain as the customer-facing name for both businesses, which will work together to deliver a seamless customer experience. Returns, exchanges and SaksFirst credit cards will continue to be accepted both online and in stores.

Saks will lead marketing and merchandising across both businesses, while the stores will fulfill the physical functions of Saks, such as buy online, pick up in-store, exchanges, returns and alterations. Saks will retain ownership and control of the Saks Fifth Avenue intellectual property, including the brand and visual identity.

“Luxury e-commerce is poised for exponential growth, and as a standalone digital company with an existing strong position in luxury, Saks is primed to win significant market share,” stated HBC chairman and CEO Richard Baker.

Marc Metrick, previously president and CEO of Saks Fifth Avenue, will serve as CEO of Saks and as a company board member. Larry Bruce, who has served for the past eight years as director of stores, has been named president of SFA and will report directly to Baker.

“As a standalone company, we are well-positioned to make the appropriate investments to drive exponential growth and deliver the same exceptional experience online,” said Metrick. “This is a pivotal beginning of Saks’ next one hundred years as a leading luxury retailer.”

With Saks’ transition to an e-commerce business, Sebastian Gunningham will join the company’s board of directors and serve as an advisor. Gunningham was previously a member of the executive team at Amazon and led its marketplace expansion, among other large technology and operational divisions at the company. He has also held executive roles at Apple and Oracle.

Rhône Capital, a significant shareholder of HBC, was actively involved in the transaction.