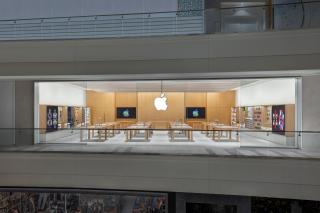 Apple has opened at American Dream.

Apple’s newest U.S. store is housed in one of the largest malls in the United States.

Apple has opened at American Dream,  Triple Five’s massive retail and entertainment center in East Rutherford, N.J. Apple American Dream — the company’s 11thstore in New Jersey — is located on the second level (Court D) of the 3 million-sq.-ft. mega-center. it features the tech giant’s latest retail format, including a dedicated pickup area for online orders, as well as a dedicated space for “Today at Apple” sessions.

According to Apple, the new store’s team members are “a reflection of the diverse community” it will serve, collectively speaking 15 different languages.

Similar to all Apple facilities, Apple American Dream is powered by 100% renewable energy.

The opening of Apple Amercan Dream follows the November reopening of its flagship at Pacific Centre, in Vancouver, Canada. The façade of the expanded, two-level store features 32-ft. floor-to-ceiling glass panels. As customers ascend to the second level, natural light flows through a glass skylight onto a 45-foot grand staircase — one of the tallest in any Apple store.

The main retail floor features various Apple product displays on the walls as well as on its signature tabletops. The second floor is home to  an open area (Forum) and a video wall. The company offers free Today at Apple sessions in the space.

The exterior of the store is framed with a living wall that spans more than 40 feet and has 144 species of locally sourced plans.