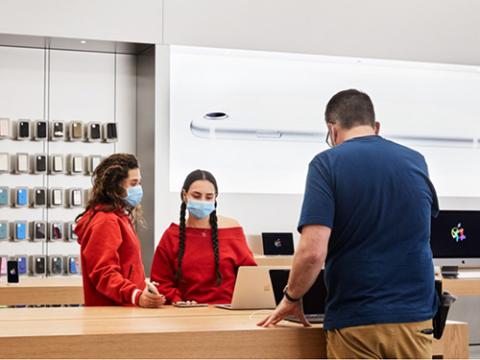 Apple has reclaimed its title as the world’s most valuable brand for the first time in five years, with Amazon coming in second.

That’s according to the Brand Finance Global 500 2021 Index, which put Apple’s brand value at $263.4 billion, up 87% over last year. The brand consultancy said Apple’s diversification strategy was behind the increase as the company has expanded into digital and subscription services and even potentially into electric cars in the future. On New Year’s Day alone, App Store customers spent $540 million on digital goods and services.

“Apple’s transformation and ability to reinvent itself time and time again is setting it apart from other hardware makers and has contributed to the brand becoming the first U.S. company to reach a $2 trillion market cap in August 2020,” the report noted. “With rumors resurfacing that Apple’s hotly anticipated Titan electric vehicle foray is underway again, it seems that there is no limit to what the brand can turn its hand to.”

Amazon’s brand value grew 15% to $254.2 billion as the company experienced an unprecedented surge in online demand amid store closures resulting from the pandemic. Most recently, Amazon acquired 11 passenger planes from struggling North American airlines to expand its air logistics capabilities as it moves towards building its own end-to-end supply chain and eventually become a serious contender in air transportation.

“Another example of Amazon’s relentless innovation in the face of global adversity, the brand has also announced its foray into the health sector with the launch of Amazon Pharmacy and fitness tracker Halo,” the report said.

Google had the third-highest brand value, inching up 1.4% higher to $191.2 billion, followed by Microsoft with a brand value of $140.4 billion, a 20% increase. Samsung came in fifth, with Walmart coming in sixth.

The fastest-growing brand in the ranking was Tesla, whose brand valuation shot up 158% to $32.0 billion.

“Emerging unscathed from the various controversies surrounding CEO Elon Musk, Tesla’s market capitalization has grown by an eyewatering $500 billion over the last year, making it worth as much as the nine largest automobile manufacturers in the world combined,” the report said.

A brand’s value is the economic benefit it would achieve if it was licensed in the open market, according to the consulting firm. The company reviews marketing investment, stakeholder investment, and business performance in determining brand value.