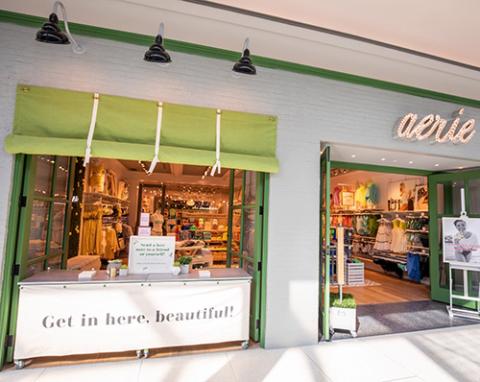 American Eagle Outfitters is expanding the footprint of its intimates and loungewear brand, Aerie, and the brand’s new spin-off concept.

As previously reported, American Eagle plans to open about 50 Aerie stores this year, for a total of approximately  400 locations by year end. It expects to have 500 to 600 Aerie stores in 2023.

“At AEO Inc., stores are a powerful tool for our omnichannel business and continue to be important for our brands,” said Andrew McLean, chief commercial officer, AEO. “Our approach to store openings is based on a deep understanding of customer and market potential. Future expansion in the Westfield Portfolio is based on achieving that potential and our core belief in engaging and serving new customers for both Aerie and the Offline by Aerie sub-brand.”