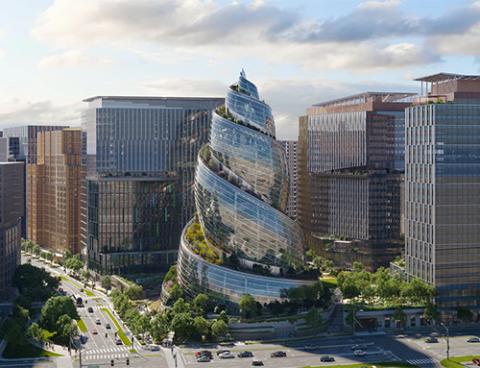 Amazon was given the green light to construct a unique, helix-shaped office building at its emerging second headquarters in Northern Virginia.

Amazon announced in late 2018 that it would invest more than $2.5 billion to build a second headquarters, in Arlington, Virginia. In 2021, the company unveiled plansfor phase one of the project, which includes an eye-catching, 350-ft. office tower, called “The Helix.”

On Saturday, The Arlington County Board gave unanimous approval to Amazon's plans to build the helix (as well as several other office towers and park space). The spiral design has a walkable ramp that encircles the building with trees and greenery.

In a blog post, Amazon said the distinctive building integrate nature and working “to inspire innovation and invention.” The interior will provide formal and casual meeting spaces in an environment filled with more than 25,000 sq. ft. of planting areas and living walls. The exterior of the structure will feature two paths for employees to engage with colleagues in meetings or to take in views of Arlington, the Potomac River, and Washington, D.C.

The building will also be home to an artist-in-residence program and a meeting center.  It will also be open to the public and community two days per month.

Sustainable By Design
Amazon HQ2 is being built green from the ground up.  The operations have been electrified, eliminating the use of fossil fuels for buildings systems and our food service.

The company has committed to powering 100% of HQ2’s operations with renewable energy through a combination of off-site and on-site solar projects, aligning with The Climate Pledge, Amazon’s commitment to be net-zero carbon across its operations by 2040.

To accomplish this, the company contracted 82 megawatts (MW) of energy from a new 120 MW solar farm in Pittsylvania County, Virginia, which is expected to generate 172,500 megawatt-hours (MWh) of renewable energy annually once operational later this year. The renewable energy generated at this site will be used in part for the operation of HQ2 and other Amazon-owned buildings across Virginia, including Whole Foods Market stores and Amazon fulfillment centers.

The remaining portion of energy generated by the solar farm has been contracted by Arlington County and will provide clean energy for use in the region. The new headquarters will also have rooftop solar panels installed, totaling 1 MW of clean energy capacity to further support sustainability efforts.

The focus on sustainability also includes: