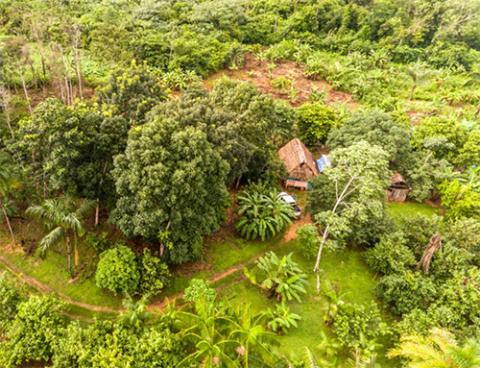 Amazon is investing in a new nature-based carbon removal initiative.

Amazon is investing in the Agroforestry and Restoration Accelerator, a new, nature-based carbon removal initiative.

As part of the e-tail titan’s commitment to The Climate Pledge, which calls for reaching net-zero carbon by 2040, Amazon announced is investing in a new initiative called the Agroforestry and Restoration Accelerator through the Right Now Climate Fund. Working in partnership with The Nature Conservancy, the Accelerator aims to restore degraded lands in ways that improve the livelihoods of local communities, while also removing carbon from the atmosphere.

The agroforestry and restoration initiative kicks off in the Brazilian state of Pará, home to 9% of the world’s tropical forest. Pará is part of the Amazon rainforest, and has lost 3,300 acres of forest land every day over the last year. Amazon and The Nature Conservancy are working with communities to restore native rainforest through the Accelerator, while also opening up a more sustainable source of income for thousands of local farmers in Pará.

Amazon believes that nature-based solutions such as conservation, restoration, and improved land-management actions are a necessary supplement to its efforts to decarbonize its business activities. According to Amazon, nature-based solutions can increase carbon storage or reduce greenhouse gas emissions in forests, wetlands, grasslands, farmland, and marine environments. They can also provide additional benefits such as conserving wildlife habitats, protecting biodiversity, improving water quality, and reducing flood risk.

Amazon is cooperating with The Nature Conservancy and other local civil society organizations on the Accelerator by helping small-scale farmers restore degraded cattle pastures to native forest and agroforestry. The Accelerator also provides farmers with sustainable income through the sales of cocoa and other crops, and will support 3,000 farmers and restore approximately 20,000 hectares of land—a land mass approximately the size of Seattle—within three years.

This initiative aims to remove up to 10 million tons of carbon dioxide from the atmosphere between now and 2050, equivalent to one year of emissions from 2 million cars on the road. The Accelerator will also experiment with alternative ways to support farmers and nurture markets for sustainable forest-based commodities, including implementing new methodologies and satellite-based technologies for quantifying and monitoring carbon capture and removal.

The goal of the Accelerator is to develop solutions that can rapidly scale from initial investment to millions of hectares of degraded pasture that have the potential for reforestation and agroforestry.

Additionally, through the recently announced LEAF Coalition—a public-private initiative to mobilize at least $1 billion to protect the world’s tropical forests, Amazon and other partners are working to curb tropical deforestation and reduce the amount of carbon emitted in the atmosphere.

The LEAF Coalition is expected to become one of the largest ever public-private efforts to protect tropical forests and support sustainable development. Along with Amazon, the coalition’s initial participants include the governments of Norway, the United Kingdom, and the United States, along with leading companies including Salesforce, Airbnb, Unilever, Bayer, Boston Consulting Group, McKinsey, GSK, and Nestlé.