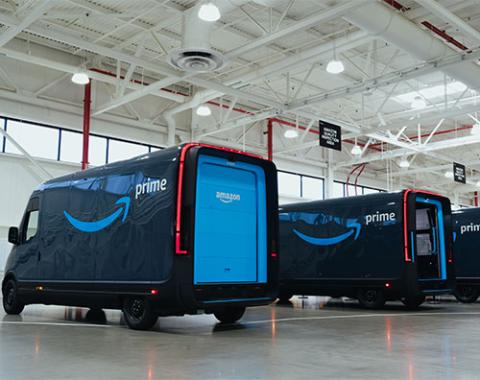 Amazon is taking a major step forward in its electric vehicle strategy.

Amazon intends to be making deliveries with custom electric vehicles in more than 100 U.S. cities by the end of 2022.

Starting Thursday, July 21, Amazon is deploying electric vans it designed and built-in partnership with manufacturer Rivian to deliver packages in U.S. cities including Baltimore, Chicago, Dallas, Kansas City, Nashville, Phoenix, San Diego, Seattle, and St. Louis. This rollout is the beginning of what Amazon expects to be thousands of its custom electric delivery vehicles in more than 100 cities by the end of this year—and 100,000 across the U.S. by 2030.

Amazon launched a pilot of the Rivian electric vans in Los Angeles in early 2021. As part of its pilot, Amazon has delivered over 430,000 packages and accumulating over 90,000 miles with the Rivian vans.

According to Amazon, this testing enabled Rivian to improve the vehicle’s performance, safety and durability in various climates and geographies. Rivian has also completed certifications with the National Highway Traffic Safety Administration, California Air Resources Board, and U.S. Environmental Protection Agency.

The e-tail giant previously committed to having the first 10,000 Rivian vehicles on the road delivering to customers worldwide as early as 2022, with a planned full fleet of 100,000 operational by 2030. The Rivian investment, first announced in 2019, is part of Amazon’s Climate Pledge to be net zero carbon across its entire business by 2040.

The custom vehicles are made at Rivian’s factory in Illinois, and include technology and features such as a safety-first design focused on 360-degree visibility and protecting drivers and pedestrians; safety features including sensor detection, highway, and traffic assist technology; embedded technology that fully integrates the delivery workflow with the vehicle, enabling seamless access to routing, navigation, and driver support; and batteries that are light, resilient, and low-cost, in addition to lasting the lifetime of the vehicle.

Chief Amazon rival Walmart is also actively engaging in efforts to launch delivery via electric vehicle. The discounter recently signed an agreement with electric vehicle maker Canoo to purchase 4,500 of the company’s all-electric “Lifestyle Delivery Vehicle,” with the option to purchase up to 10,000 of the small vans.

“Fighting the effects of climate change requires constant innovation and action, and Amazon is partnering with companies who share our passion for inventing new ways to minimize our impact on the environment. Rivian has been an excellent partner in that mission, and we’re excited to see our first custom electric delivery vehicles on the road,” said Andy Jassy, CEO of Amazon. “And, in addition to being sustainable, these new vehicles are also great for drivers—they were designed with driver input and feedback along the way, and they’re among the safest and most comfortable delivery vehicles on the road today.”

“Today represents an important step, not just for Amazon and Rivian as partners, but also for transportation and the environment,” said R.J. Scaringe, CEO of Rivian.

Amazon has added thousands of charging stations at its delivery stations across the country, and says it will continue to invest in building an infrastructure to support a more sustainable delivery fleet. Amazon has also partnered with the nonprofit CERES and several other fleet operators to launch the Corporate Electric Vehicle Alliance, a group of companies seeking to accelerate the transition to electric vehicles.