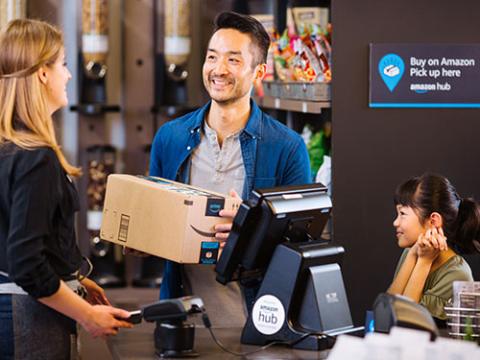 Amazon is taking some of its fulfillment closer to where its customers live.

The online giant is planning to open 1,000 small delivery hubs in suburban neighborhoods and cities across the U.S., reported Bloomberg. The move comes as Amazon looks to compete with other retailers, particularly Walmart, who are using their network of stores as mini-fulfillment centers to provide convenient same-day deliveries. The Amazon hubs would eventually expand to 1,500 locations.

Amazon faced shipping delays during the height of the pandemic. With the holidays approaching, the online giant is now focused on honoring its pre-pandemic pledge to get many products to Prime subscribers on the same day, according to Bloomberg.  Now it is doubling by investing billions in building out small warehouses.

The U.S. industrial real estate sector is expected to grow https://chainstoreage.com/jll-new-darling-commercial-real-estate-industry to more than 1 billon square feet by 2025, fueled by e-commerce’s pandemic boom.

The news that Amazon is planning to open local delivery hubs comes about a month after  the Wall Street Journal reported that the company was in talks with Simon Property about the   possibility of turning vacant store space previously occupied by ailing retailers, including J.C. Penney, into distribution hubs for the e-retailer. But  Bloomberg report described that option as a "last resort."

In related news, CNBC reported that Amazon continues to expand its Amazon Air fleet, which now includes about 70 planes. The fleet is expected to grow to more than 80 by 2021. CNBCcited a report by DePaul University’s Chaddick Institute for Metropolitan Development.