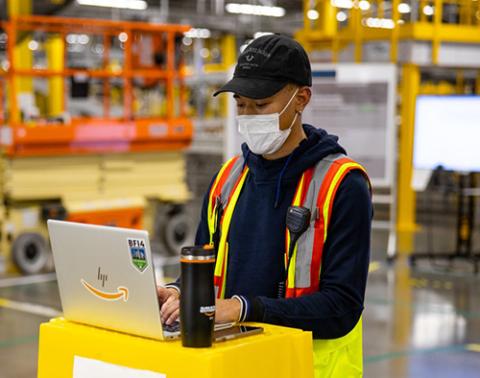 Amazon is once again expanding its workforce in response to the continuing surge in online shopping brought on by the pandemic.

The online giant announced that it adding 100,000 new full- and part-time employees across the U.S. and Canada.  The jobs, which are in Amazon’s fulfillment and logistics network, offer a starting wage of at least $15 per hour. In select cities, Amazon is offering sign-on bonuses up to $1,000 to new hires.

The hiring blitz follows the company’s announcement last week that it will hold a virtual career day for 33,000 open corporate and technology jobs. And earlier this year, in two separate announcements, Amazon said it would add 100,000 and 75,000 new operations jobs, respectively.

“We are opening 100 buildings this month alone across new fulfillment and sortation centers, delivery stations, and other sites,” said Dave Clark, senior VP of worldwide operations at Amazon. “We are proud to be hiring 100,000 new associates with pay of $15 per hour or more across those buildings and in our network. Our expansion also comes with an unwavering commitment to safety. Collectively, our new team members have already completed more than 1.2 million hours of safety training, with over 500,000 more hours expected, to ensure that in addition to fast and efficient delivery for our customers, we’re providing a safe and modern environment for our employees and partners.”

Amazon has already opened over 75 new fulfillment, sortation centers, regional air hubs, and delivery stations in the U.S. and Canada in 2020. Since 2010, Amazon says it has directly created more than 600,000 jobs in the U.S across its corporate offices and operations sites, and invested more than $350 billion across more than 40 states, including infrastructure and compensation.

With more than 875,000 employees worldwide, Amazon more than 600,000 full- and part-time employees in the U.S., across more than 40 states and 250 different counties, two headquarters, 18 tech hubs, more than 150 fulfillment centers, sortation centers and delivery stations and more than 24 Amazon Go, 4 Star and Amazon Books stores.