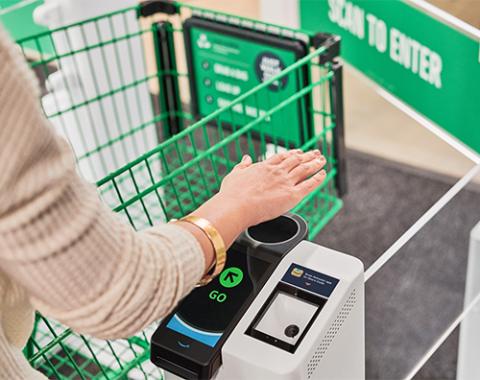 Of the 31 Amazon Fresh stores (locations at end of article) opened to date, the new Huntington Beach location is the 15th in Southern California. In addition, Amazon recently announced it is now hiring for hundreds of full- and part-time employees for two Amazon Fresh grocery stores that will open in Paramus, N.J., and Oceanside, N.Y. These will be the first Amazon Fresh store locations in each state, and both will feature Just Walk Out shopping.

Customers who opt for Just Walk Out shopping can enter the store by scanning the in-store QR code in their Amazon app, use the Amazon One proprietary palm payment solution, or insert a credit or debit card linked to their Amazon account to open the Just Walk Out gates.

Just Walk Out leverages a combination of computer vision, sensor fusion and deep learning that enables shoppers to shop the store, pick out what they want and skip the checkout when they’re done. Anyone shopping at the new Amazon Fresh store can utilize the cashierless technology, which connects to their Amazon account or credit card.

Originally available only in Amazon Go convenience and small-format grocery stores, Amazon then began rolling out Just Walk Out to select Amazon Fresh and Whole Foods locations, and also licenses the technology to third-party retailers.

Amazon now operates 31 Amazon Fresh stores across the U.S., including 14 in California, seven in Illinois, four in Washington state (including one designed to be zero net carbon), two in Virginia, and one each in Maryland, Pennsylvania, Virginia, and Washington, D.C. Amazon Fresh stores are designed from the ground up to offer a seamless shopping experience, with extra features for members of the Amazon Prime paid loyalty program.

Originally available only in Amazon Go convenience and small-format grocery stores, Amazon then began rolling out Just Walk Out to select Amazon Fresh and Whole Foods locations, and also licenses the technology to third-party retailers.