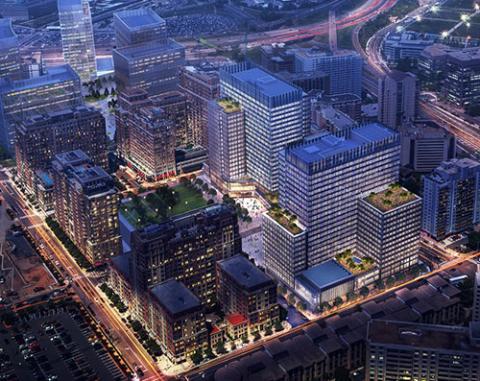 Amazon’s second headquarters in Arlington, Va., will obtain all its energy from a solar farm.

The e-tail giant plans to use 100% renewable energy to power what will eventually be a 4 million-sq.-ft. campus. Amazon will build a new solar farm in Pittsylvania County, Virginia, which will power its new headquarters along with other operations it owns across the state, including Whole Foods stores and fulfillment centers. The project is planned for completion by summer 2021.

Amazon plans to invest more than $2.5 billion dollars in building the HQ2 campus over the next decade. The campus will include 1 million sq.-ft. of LEED Gold-certified energy-efficient office buildings in two 22-story towers. There will also be 50,000 sq. ft. of new retail space for shops, restaurants, and a daycare center for area residents and an expected 25,000 Amazon employees.

Amazon is making this solar energy decision in the midst of a larger sustainability commitment. The company has joined The Climate Pledge to become net-zero carbon by 2040. To date, Amazon has launched 84 renewable energy projects that will provide over 2,000 MW of renewable capacity and are projected to deliver more than 5.5 million MWh of renewable energy annually. These projects include 21 utility-scale wind and solar farms and more than 50 solar rooftops installed on fulfillment centers and sort centers around the globe.

"Our team is constantly thinking about how we can help create and build a sustainable future across our entire operations,” said Patrick Leonard, senior manager of Amazon’s renewable energy procurement team. “We have contracted with several large solar farms and have rooftop solar installed at many of our fulfillment center sites across the globe. Once this project is complete, we will continue to look for ways to advance our commitment to sustainability in Arlington."