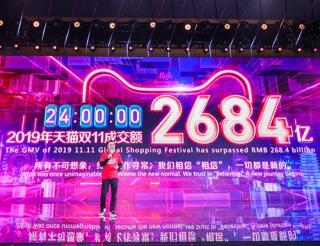 The 11th annual Alibaba Singles Day was a singular achievement in e-commerce.

Alibaba Group’s 24-hour online sales extravaganza generated an estimated $38.4 billion in gross merchandise volume (GMV) on Nov. 11, 2019 (most of China is located in a time zone 13 hours ahead of U.S. ET). This represents a 26% increase from the previously record-setting $30.8 billion USD in GMV recorded in 2018.

“Today we showed the world what the future of consumption looks like for brands and consumers,” said Fan Jiang, president of Alibaba subsidiaries Taobao and Tmall. “We are meeting the growing demand of Chinese consumers and helping them upgrade their lifestyles, while introducing new users to our digital economy from across China and around the world.”

Alibaba had some technical assistance in handling the record-setting transactional volumes. Jeff Zhang, CTO of Alibaba, described the 2019 edition of Singles Day as an airplane flying at turbo speed, but with a brand new engine. Alibaba moved its core systems onto the cloud, significantly boosting computing performance with its new Apsara operating system.

Anspara enables Alibaba to oversee tens of thousands of servers at once, diverting computing power to different servers when they need it most, such as to payment and transaction systems at the very start of the shopping day.

“Everything from orders made on the platform to delivery volumes, all of these analytics are processed on Apsara,” said Zhang. Alibaba also developed its first artificial intelligence (AI) inference chip, “Hanguang 800,” which was not widely deployed this year but is expected to run a large number of AI applications during Singles Day 2020.

"Further proof of its expansion is its current reach beyond China,” said Morton. “The country's online retailers are taking the concept to southeast Asian markets. Hiring international stars such as Taylor Swift (who performed as part of the event’s promotion) also points to the event's globalization.

"Products from the U.S. are always among the most popular on Singles Day as consumers consistently reach for higher-value items. The ongoing trade dispute between China and the U.S. may slightly dampen enthusiasm for U.S.-made luxury goods, but is unlikely to cause much of a shift in purchasing decisions."