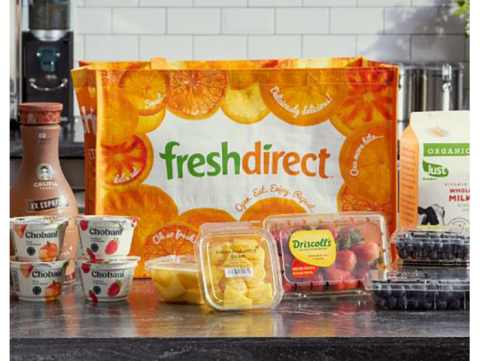 Ahold Delhaize is putting money behind its promise to boost its omnichannel presence in the U.S.

The Dutch supermarket conglomerate has entered into an agreement, along with private investment firm Centerbridge Partners, to acquire New York City-based online grocer FreshDirect for an undisclosed sum. Ahold Delhaize will acquire the majority share, funded by cash on hand, and Centerbridge will be a minority equity investor with a 20% stake. (Ahold recently announced its intention to increase its online capacity by nearly 100% in the U.S.)

In addition, Fresh Direct’s e-commerce platform enables customer ordering, from picking through packing to last mile delivery, including the ability to provide same-day and rush delivery.

Currently, Ahold’s U.S. businesses reach approximately 90% of households in their markets with home delivery and click & collect, and around 70% with same-day delivery options. Other recent omnichannel moves by the company include phasing out its Peapod online delivery service in favor of having customers place digital delivery orders directly with its Stop & Shop grocery brand.

“FreshDirect is a leading local brand in the fast-growing online grocery sector in the New York City metro area, one of the most important ecommerce food markets in the U.S.,” said Frans Muller, Ahold Delhaize CEO. “This acquisition further propels our omnichannel evolution. The deal allows us to reach additional customers in the New York trade area and therefore will add incremental sales to the business. It further enables us to address customers’ growing preference for convenient ways to shop.”

After the deal closes, FreshDirect will retain its brand name, report to a seven-person board, and continue to independently operate out of its facility in New York City. The transaction is expected to close in the first quarter of 2021.

“We are strong believers that the future of grocery retail involves getting customers the best quality food, exactly when they want it, with the best customer service,” said David McInerney, FreshDirect CEO. “This transaction marks an important milestone in the continued growth of FreshDirect. I believe Ahold Delhaize’s global scale, focus on strong, leading local brands, and ability to utilize cost-of-goods synergies, will allow FreshDirect to achieve its full potential.”