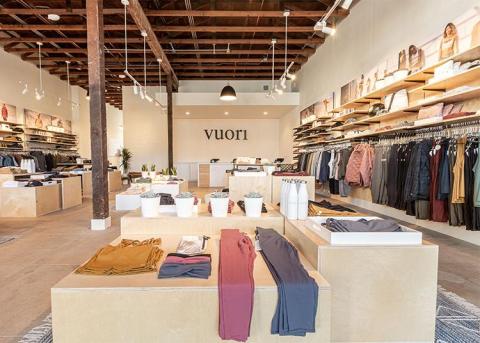 Vuori plans to open 100 U.S. stores in the next five years.

A Southern California-inspired, direct-to-consumer activewear brand for men and women has big plans for expansion on the heels of receiving one of the largest investments in recent times for a private fashion company.

Vuori received a $400 million investment from SoftBank Vision Fund 2, valuing the brand at a whopping $4 billion. The company plans to double down on retail expansion in the United States, with more than 100 store openings slated for the next five years.

Vuori was founded in 2015 as a direct-to-consumer fitness activewear brand, but has since expanded into wholesale partnerships with REI and Nordstrom. In addition to its e-commerce business, the company has nine physical stores, with eight in its home state of California.

Vuori also plans to use the new investment to launch its international expansion next year, launching an omnichannel business in key markets throughout Western Europe and Asia Pacific and an innovation center in Taiwan.  A London store is scheduled to open next spring.

In addition, Vuori said it will continue to expand its product offering, make key investments in infrastructure and people and expand its sustainability efforts. Currently, and through partnerships with organizations such as Climate Neutral and CleanHub, the brand is offsetting its carbon and plastic footprints and taking steps to eliminate 80% of plastics from its shipping and supply chain by 2022.

“SoftBank has a long track record of identifying market-leading companies and supporting entrepreneurs with bold visions,” said Joe Kudla, founder and CEO of Vuori. “We are grateful to have their partnership as we move into an exciting new period of growth and evolution as a company.”

Citing a strong e-commerce business, thriving brick-and-mortar stores, and a network of best-in-class wholesale partners, Vuori noted that, unlike many other digitally native brands, it has been profitable since 2017.

“With its strong consumer engagement, sustainability focus, and sheer growth, we believe Vuori is a leading brand in the attractive activewear market,” said Nagraj Kashyap, managing Partner at SoftBank Investment Advisers. “We are delighted to partner with Joe and the Vuori team as they introduce new products to consumers and expand globally.”

SoftBank Vision Fund 2 is the second institutional investor to back Vuori, following Norwest Venture Partners who invested in the company in 2019.

The investment underscores excitement in the surging brand, known for its performance clothing that is built to move in yet styled for everyday life, as it sets sights on the international market.