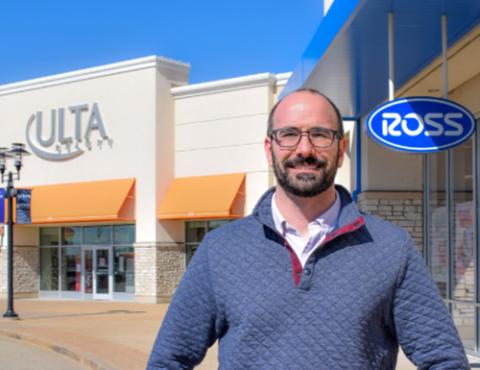 Sean Garrett is Cullinan Properties' president of acquisitions and director of community relations.

To call Sean Garrett a builder is true enough, but a bit misleading.  He’s the president of acquisitions and director of community relations for Cullinan Properties, whose commercial real estate holdings include Burleson Commons in Dallas and Quincy Town Center in Quincy, Ill. But it’s the community relations part of his title where most of the building gets done. It can take years, he says, to lay the foundations of trusting relationships with municipal leaders that must be in place before any Caterpillar excavators break ground—though Garrett knows some things about Caterpillar, too, as you’ll see.

Sean, as you know, lots of residents left major markets during the pandemic, leading retailers to follow them. Are secondary and tertiary markets able to accommodate them?

Smaller markets are very hungry for strong retail brands. It’s a big thing for them to get, say, an Ulta or a Target. The crux of Cullinan’s retail business is dependent on creating relationships with municipalities in secondary and tertiary markets and helping them create developments that end up being win-win projects for everyone involved.

We have to make municipal leaders confident that we can deliver. That’s something that has to be built before any buildings.

Give us an example.

The Levee District in East Peoria, Illinois, is a good example. The site where it sits used to be a Caterpillar tractor facility. Caterpillar closed it due to age and deeded the property to the city. So East Peoria came into possession of this 90-acre-plus tract and needed an expert to transform the site and turn it into an asset for the community. Cities aren’t development experts and don’t have the resources themselves to construct, lease, and finance these deals. Nor can they be expected to know what is trending in retail. Once we got engaged, we attracted Target, Costco, and Bass Pro Shop to the area. That ended up drawing more than 40 spin-off businesses surrounding The Levee District plus the 30 businesses within our own development.

Did the project help save East Peoria from a potentially ugly situation?

East Peoria was always known as a blue collar town. That plant dated back to the early 1900s. It was one of Caterpillar’s originals. Now when people think of East Peoria, they think of The Levee District and see it as a hub of commerce. The town was able to generate a substantial increase in tax revenue without adding a bunch of city services like added police and fire department personnel. This was an infill project and they already had what they needed to service the property.

Live-work-play is the order of the day, and that’s something that has long been a part of Cullinan’s projects, no?

Diane Cullinan started in residential real estate and founded this company based on a vision that mixed-use developments were the future. Each development we work on is unique. We can’t be relying on cookie-cutter retail developments. We integrate apartments and we are one of the leading groups in the country in bringing medical uses to former retail anchor spaces. Our Streets of St. Charles project, which is now over 80% complete, is near a historic downtown. We had to work with the city in a way that ensured that what we were going to do was not going to hurt long-time tenants, but help them.

What’s the secret to creating projects that work for towns, for tenants, and for you all at the same time?

Relationships. It could take several years of building relationships with mayors, council members, economic development managers. We have to make them confident that we can deliver, and that’s something that has to be built before any buildings. We only want to go into deals in which everyone involved is successful. We want the cities to be the heroes in these stories, not us.