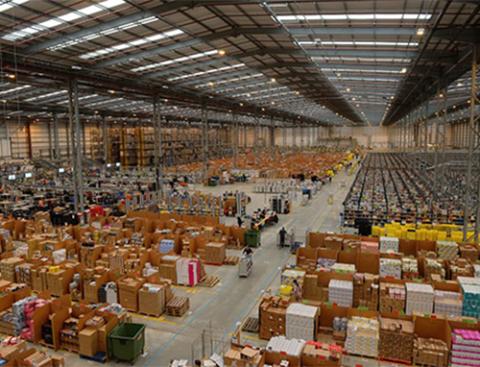 Only 3% of warehouse space is available in the U.S. and rents have topped $9 per sq. ft. — both record figures.

Vacancy rates in warehouses are at an all-time low and not expected to improve anytime soon.

Mall and shopping center space available for selling retail products has hit a 10-year low,  but the space retailers need to house their inventories may be even harder to find.

Record-high asking rents and record-low vacancy rates in warehouses were recorded in 2021’s fourth quarter, according to a report released by CBRE’s industrial unit, both brought about by the escalation of product deliveries and supply chain issues that caused retailers to ratchet up their manufacturing orders.

More than 1 billion sq. ft. of industrial and logistics space were purchased or leased in 2021—the largest annual gross amount recorded since CBRE started tracking the figures in 1989. The mad scramble for warehouse space that ensued last year drove vacancy down to just 3.2%, the lowest rate on record.

“We anticipated that last year would set a record, but this level of activity is extraordinary,” said John Morris, executive managing director and industrial and logistics leader for CBRE. “As retailers require more safety stock and e-commerce continues to expand, more space is needed. All signs point to the same demand continuing in 2022.”

Net absorption--a positive tracking of which means more space has been leased than vacated—was highest in Dallas/Ft. Worth, Chicago, and Atlanta. All three of those markets—along with the Pennsylvania I-78 corridor, Phoenix, and the Inland Empire—now lead the U.S. in industrial space under construction.

More than 500 million sq. ft. of space is being built nationwide, but CBRE predicts that supply will remain short and rents high due to persistent supply-chain deficiencies. One of the nation’s largest third-party logistics companies, C.H. Robinson, agrees.

“Because we serve more than 7,500 retailers, we keep a close eye on inventory levels,” said Noah Hoffman, the company’s VP of North American surface transportation. “When someone doesn’t know how much of their merchandise they’re going to get from their supplier in Asia or when it’s going to arrive, they’ve been ordering 1,000 of a particular toy or game instead of what might have been 100. That fills up warehouses.”