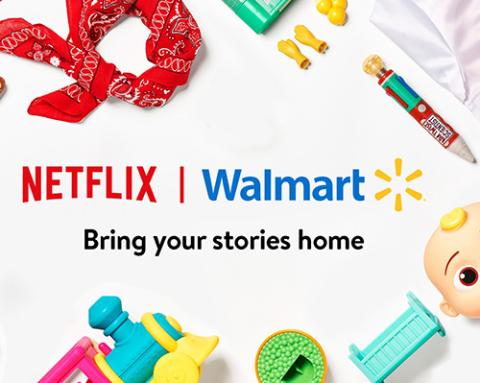 In time for holiday shopping, consumers can buy merchandise tied into “Stranger Things” and other popular Netflix shows on Walmart’s website.

Walmart has launched a digital storefront, called Netflix at Walmart, that features products in a variety of categories, including music, apparel, toys and games from shows. The majority of the items are exclusive to Walmart.

The new site debuted with items tied into “Stranger Things,” “The Witcher,” “Nailed It,” “CoComelon” and “Ada Twist, Scientist.” Coming soon are “Squid Game” T-shirts. The listed items range in price from an Ada Twist” Cuddle Plush doll for $10.97 to  a “Stranger Things” Bluetooth cassette player, at $65.88

In addition to new products, the Netflix Hub on Walmart will offer customers exclusive experiences to engage with popular Netflix shows. For example, it will soon launch a crowd-sourcing opportunity called Netflix Fan Select that will allow fans to vote for merchandise they’d like to see from favored Netflix shows — and then Walmart merchants will bring them to life, the retailer said.

“The Netflix Hub brings together some of its most popular shows in its first digital storefront with a national retailer, and we’re proud to partner with them on this new adventure that will let our customers dive even deeper into their favorite stories and characters,” said Jeff Evans, executive VP entertainment, toys and seasonal, Walmart U.S., in a post on the company’s website.

Last week, Walmart and American Express entered into a partnership that whereby holders of the American Express Platinum card who use their card to purchase a monthly Walmart+ membership can receive a statement credit which covers the full monthly membership cost of $12.95 a month, plus applicable taxes.

The Walmart-Netflix deal comes as retailers are preparing for what is expected to be a very busy holiday season.