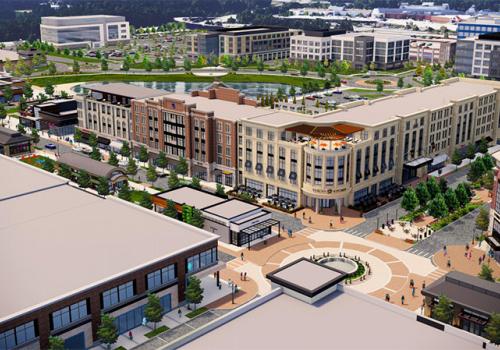 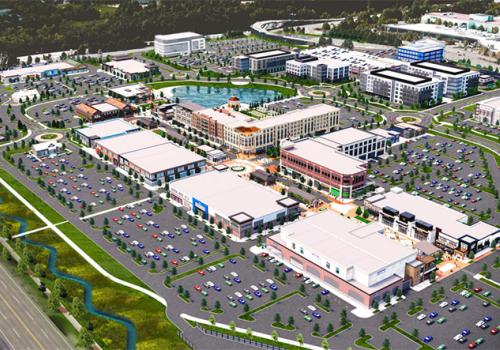 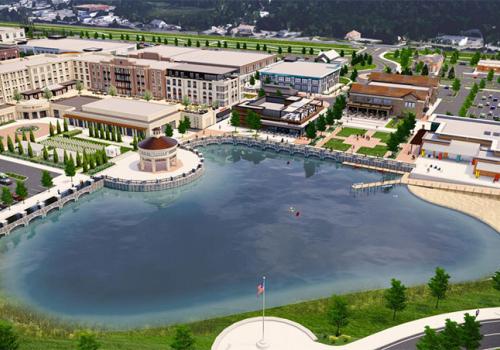 For more than 100 years, Rockingham Park in this New Hampshire town just 30 miles from Boston, served as the metropolitan area’s premier racetrack. When the racing stopped there in 2010, a consortium attempted to put a casino on the site. That effort failed, and a local businessman named Joe Faro, founder of Tuscan Kitchen restaurants and a successful commercial foodservice business, decided to buy the 170-acre property.

Upon completion, Faro’s Tuscan Village will encompass 800,000 sq. ft. of retail, 900 residential units, two hotels, more than a million sq. ft. of class A office space, and an entertainment district. Its centerpiece will be a 6-acre lake.

“You’re looking at two miles of frontage in one of the best locations in New Hampshire. It’s right off of I-93, which takes you right to Boston in 30 minutes,” said Faro.

Simon’s Mall at Rockingham Park is located across the road from the site.

With Boston’s population brimming with young professionals in the tech and medical industries, and rents rising sky-high, Faro had the idea that a mixed-use project combining residential, office, and retail in a place with no state income tax would prove attractive to Boston residents and businesses.

“It’s also the biggest piece of flat, developable land in all of New England,” added Mike Powers, who’s in charge of leasing the new project, Tuscan Village, most of which expected to opened in 2020.

Corsa, a luxury apartment community, is already taking in tenants at the site, and a Market Basket supermarket is the first retail tenant to open. Other retail tenants signed by Powers include LL Bean, Old Navy, Ulta Beauty, Chipotle and Drive Custom fit. Faro will relocate his Salem Tuscan Kitchen restaurant to the site, as well.

The lake will be a larger version of a natural lake that existed on the property. It will be surrounded by walkways and greenspaces and a lakefront LL Bean will be able to rent kayaks to visitors.

The project will contain 2.8 million sq. ft. of gross leaseable area, more than a quarter of it retail.

“This is like nothing else in the region,” Powers said. “We will be complementary to what’s going on across the street at the mall, but we’re going to be much more relevant to the retailers and the consumers of today.”