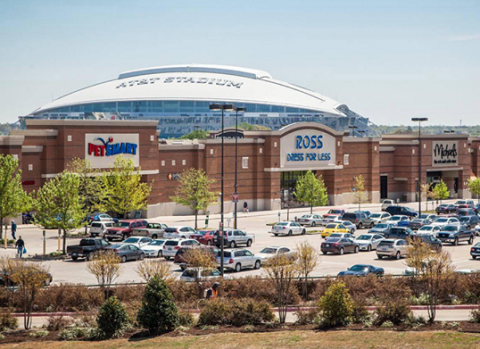 Arlington's Lincoln Square will re-emerge as a mixed-use adjunct to Arlington's Entertainment District.

The Trademark Property Company has acquired the half-million-sq.-ft. Lincoln Square Shopping Center in the town where the Texas Rangers play and will turn it into a mixed-use development.

The City of Arlington has entered into a 30-year public-private partnership with Trademark that requires an investment of at least $150 million into the property in the next six years. The town’s City Council will be involved in the renovation, having co-invested $14.2 million for the opportunity to collaborate with Trademark on the development along with the city’s residents.

“Lincoln Square has been an iconic north Arlington property for nearly 40 years, but the aging property has not seen the innovations or private investment needed to keep it market-relevant,” said Arlington Mayor Jim Ross. “Trademark’s total $250 million-plus planned investment will serve as a catalyst for even more redevelopment.”

Just last month, The Cordish Companies broke ground on One Rangers Way, a luxury residential project in the Arlington Entertainment District. The build is part of a $1 billion development plan that will include the Loews Arlington Hotel & Convention Center, the National Medal of Honor Museum, and Spark Coworking.

It was Cordish’s Live! Entertainment division that helped spark the burgeoning of the entertainment district in 2018 when it opened the $250 million Texas Live! hospitality and entertainment center near the Rangers’ Globe Life Park.

“Now is the time to start imagining what this new and better project will look like,” Montesi said. “We pride ourselves on being learners, not knowers. We want to hear from those who understand this area so we can meet their unmet needs and desires.”