Lakewood Ranch in Sarasota, Fla., is the top-selling multi-generational master-planned community in the country

Retailers looking for growing markets in which to open stores can gain valuable insights in a new report that reveals the top-selling master-planned communities in the United States.

The Villages, an “active adult” community, in Central Florida is once again the top-selling community in the nation with an estimated 1,500 sales year to date, according to RCLCO Real Estate Consulting’s“The Top-Selling Master-Planned Communities of Mid-2022.” The ranking is based on total new home sales as reported by each individual community.

Lakewood Ranch in Sarasota, Fla., claimed the No. 2 spot overall in the study.

It also is the top-selling multi-generational community in the country, with 1,026 sales.

Silverado in Dallas, earned the third place rank through the first half of the year with 599 sales.

Nationally, the average price among all new single-family homes is up 15% since mid-year 2021, and over 40% since April 2020 amid the depths of pandemic pricing, the study noted.

DECLINED
The report noted that total new home sales among the 50 Top-Selling Master-Planned Communities declined by 18% in the first half of 2022 compared to the same time period last year.

Supply chain issues and inadequate new home inventory have continued to pose problems for developers, according to RCLCO, as price increases and interest rate hikes have begun to impact traffic from potential buyers in recent months.

“The results of this updated Mid-Year report confirm that supply chain disruptions continue to have an impact on the ability of master-planned communities to meet new home demand, though climbing interest rates and price appreciation have begun to have an impact on that demand, at least in the near-term,” said RCLCO Principal Karl Pischke. “However, it is important not to overreact to the slowing of sales seen over the last year, as these are still short-term trends. The long-term future of the for-sale housing industry, as evidenced by favorable demographic tailwinds, is strong. And the future of Master-Planned Communities, particularly in their ability to capture an outsized share of buyer demand during uncertain or difficult economic times, provides another reason for optimism.”

Every year since1994, RCLCO has conducted a national survey identifying the top-selling MPCs through a rigorous search of high-performing communities. The ranking is based on total new home sales as reported by each individual community, and establishes updated rankings from the previously released year-end report, The Top-Selling Master-Planned Communities of 2021. 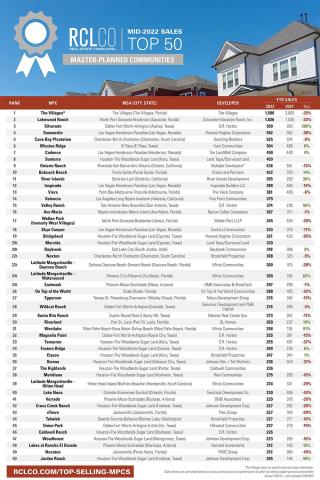