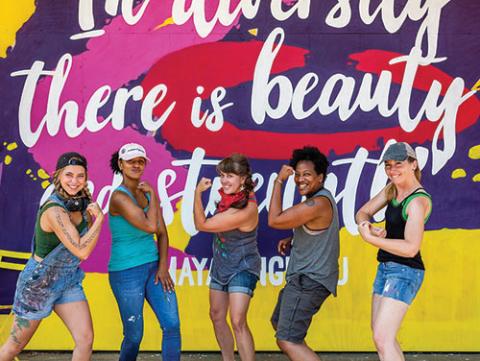 Normally, we present the year’s Top 10 Retail Center Experiences, an all-star lineup of retail centers that over-achieve in adding merriment to the merchandise. But guest experiences have been few in this virus-plagued year, so Chain Store Age decided to shine a light on centers and retail real estate companies that are leading the way in creating safe, yet still-inviting experiences to draw crowds back to their properties. In this challenging time, our COMEBACK centers are re-engaging their visitors with society, not just retail. The editors of CSA's No. 2 pick is:

That old proverb about getting lemons and turning them into lemonade? Easton Town Center, in Columbus, Ohio, performed a nifty COVID version of it.

When it was clear that the Bon Vie restaurant in the Unity Pavilion was not going to open until after the crisis wound down, Easton hired artists to paint it yellow and festoon it with images of flowers and messages of diversity.

“Shutting down Easton was really hard. It’s been here 20 years and never been shut down. Seeing it like a ghost town was heartbreaking,” said Easton chief executive Jennifer Peterson.

What turned out to be energetic fun for Peterson was working with her staff to create socially distanced events that got Easton’s many fans flocking back. An Easter Bunny visit drew a line of 600 cars and its annual Movies by Moonlight series lived on.

“The drive-in concept was 11 days from concept to market. That was really fun,” said Peterson. “We partnered with some nonprofits and we had confidence it would be well-accepted. Almost all of them sold out.”

Easton Man, a bulky blue bulwark with a face mask, appeared on signage and in person all over the property, advising folks to “Be a hero. Wear a mask.”

When we spoke to Peterson in early July, she was preparing for the drive-in finale, a live broadcast of the interstate MLS rivalry between the Columbus Crew and FC Cincinnati. Fitting COVID-19 content, indeed. It’s known as the #Hellisreal Derby.

Stay tuned for daily profiles of the next eight centers. Until then, catch up on what you missed: