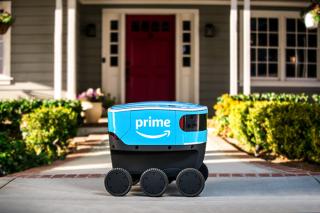 Autonomous delivery vehicles are all the rage these days, and Amazon is never one to miss out on a technology trend.

Amazon’s forays into autonomous aerial delivery with drones are well-known, but now the omnichannel giant is taking the concept to the ground. Amazon has developed a new, proprietary, fully-electric delivery system known as Amazon Scout. Scout devices are described by Amazon as being the size of a “small cooler” and traveling on sidewalks at a “walking pace.”

Starting today, these devices will begin delivering packages to customers in a neighborhood in Snohomish County, Washington. Customers will place normal online orders and their packages will be delivered either by a traditional carrier or by Amazon Scout. Scout deliveries will encompass orders made via the Amazon mobile app or website and across all delivery options for non-Prime and Prime members.

Amazon is launching its Scout pilot with six devices delivering packages Monday through Friday during daylight hours. The devices will autonomously follow their delivery route but will initially be accompanied by an Amazon employee. According to Amazon, the devices can safely and efficiently navigate around pets, pedestrians and anything else in their path.

“We are delighted to welcome Amazon Scout into our community,” said Snohomish County executive Dave Somers. “Similar to Amazon, we are always looking for new ways to better deliver service to our residents. From the latest Amazon innovation to cutting edge technology, Snohomish County is a great place for entrepreneurial creativity.”

2019 is less than one month old, but has already seen a number of high-profile autonomous delivery pilots launched. Although Amazon’s pilot is delivering all types of products, other retailers have been particularly focusing on the grocery and food area. These include a grocery delivery pilot Walmart is running with autonomous vehicle company UDelv in Surprise, Arizona, as well as an upcoming March 2019 joint pilot between DoorDash and General Motors’ Cruise Automation self-driving vehicle division.

Stop & Shop will pilot the concept of autonomously delivering the grocery store itself to consumers. Beginning in spring 2019, the supermarket chain will launch driverless grocery vehicles in the Greater Boston area. The vehicles, provided by San Francisco-based startup Robomart, will bring a selection of Stop & Shop produce, meal kits and convenience items directly to consumer homes.
Advertisement