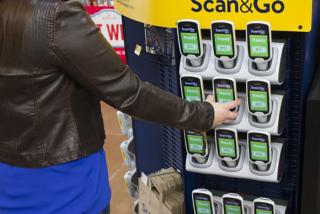 Walmart customers can no longer use their smartphones to pay for their order and skip the checkout line.

Despite a successful rollout across its Sam’s Club warehouse chain, Walmart is discontinuing is Scan & Go mobile checkout app across its retail stores. The deciding factor was that too many customers found the process too cumbersome, especially when it came to bagging, weighing and then scanning items, including fresh fruit and vegetables, according to Bloomberg.

The technology was initially introduced in a few select markets, including Dallas-Fort Worth, Texas; Orlando, Florida, and Northwest Arkansas. In January, the discount giant announced that the app would be expanded to 100 stores in 33 states across the country. However, Walmart reported that the app was considered “a test,” according to Ragan Dickens, spokesman for Walmart.

“We’ve completed the test, and will use the information we learned from customers and associates as we continue to create a better, easier shopping experience in our stores and online,” he told Chain Store Age.

While the program will be pulled out of approximately 150 Walmart stores, the service will remain at Sam’s Club, where its usage doubled last year, Sam’s CEO John Furner said in the Bloomberg report.

One potential replacement is the company's “Check Out With Me” service. The program outfits associates with mobile devices and Bluetooth printers that enable them to check out customers, and provide them with a receipt on the spot. The discount giant is testing mobile technology in its Lawn & Garden Centers across more than 350 stores.
Advertisement